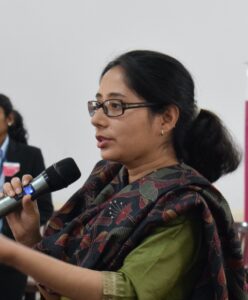 Being an Indian Muslim is a performative experience.

What we feel inside, we are not able to, nor have we ever been able to, articulate as openly upper caste Hindu liberals so freely do. And I have a problem with this inequity.

Indian Muslims have to blend in, even as we stand out whenever a threat to national security is perceived.

This fear of fully articulating our problems with India, not as Indians but as Muslims, and I should say here that I’m speaking from the perspective of north Indian Muslims, has I think stunted or rather stifled our critiquing processes.

This is reflected, in my opinion, in the narrative of the CAA protests. I spoke to an Indian Muslim woman protesting in Aligarh and I asked her what the word “Indian Muslim” meant to her and she said, “I am an Indian first.”

Over and over again I’ve heard the assertion by Indian Muslims that this is their India. But I wonder why. What has India done for Indian Muslims? Whenever Modi goes abroad, we are used as marketing tools to show the world that India is still a democracy. But Modi is not who I want to talk about today. I want to talk about upper caste Hindu liberals and their blind spots.

I returned to India in 2006 and since then I have seen a pattern of behaviour among upper caste Hindu liberals that is akin to the behaviour of white liberals in America, where I was.

The patterns that I’ve seen are: the lack of acceptance of the amount and degree of power and privilege that liberal-minded caste Hindus wield in this country. This lack of acceptance manifests itself in the invisibility of this power or acknowledgement of it so that we have, in liberal newsrooms and other spaces, a context-less mode of working that is accepted as a code of conduct, but that is actually grounded in certain oppressive Brahminical practices.

This last question, in fact, is one that perhaps many have not asked themselves when reporting on Indian Muslims.

And if you think this is an irrelevant point, ask yourselves if you would not ask this question when thinking of reporting from Kashmir or the Northeast.

Newsrooms do not seek out Indian Muslims to report on rights violations and stories of historical marginalisation as they happen all over India, and especially in Uttar Pradesh, to members of their own community (here I acknowledge that the words “community” and “members” and the idea of belonging itself is fraught with tension and realities of marginalisation within the community). Why, because we’re Indians first?

So, I think it is important to have enough representation in newsrooms so that you do not need to send out a token Indian Muslim to report on issues affecting their community.

And if you’re thinking but of course everyone has a choice, then just take a head count of how many Indian Muslims there are among us today.

And so this is the second similarity that I find: this unabashed belief that everyone has the same choice and the same shot at a story or a career in journalism. We don’t. I don’t. And I am a privileged upper-class Muslim.

The third fallacy of white liberals and, I would argue, Brahmins, is the idea that all are the same.

In reality, Brahmins are the only community that can think like that because, when you have power, perhaps there is a belief that it allows one to transcend one’s own specific cultural contexts and write about everyone and speak for everyone, but the reverse is hardly the case.

This is why we see the use of bindis and burkhas by women protesting against the CAA. While many see it as a symbol of solidarity between women across religious lines, I see it as an erasure of the specificity and problematics that come with wearing the burkha or the hijab.

A bindi in India is not and nor will it ever be the same as wearing a burkha. It is basically a performance of solidarity, an intrusion into what is a movement led by Indian Muslim women.

A lot of people cheered for young Hindu women who wore the hijab, again in solidarity with Muslim women. But again to me this is false solidarity; rather it is the taking away of Indian Muslim women’s voice, or perhaps tilting the angle  just a little so that, once again, the focus is on how we are all Indian and therefore the same rather than how we are different but also all equal.

As I write this, I feel somewhat guilty, like I have betrayed the spirit of this country and the anti-CAA protests. And this is a struggle: this feeling of being irked – a feeling in my gut that the way that this profession currently undervalues Indian Muslim and minority voices is wrong – but also a feeling of guilt, like I’m turning away a thoughtful gift. And yet, this is how this solidarity feels: conditional if Indian Muslims continue to play their part as peaceful, patriotic, and peace loving protestors and citizens, and promptly taken away if they question the motive, means, and process through which this solidarity is expressed. If they question the power and privilege behind this solidarity.

Note prepared for the panel on “Journalism, Culture, and Identity” during the 15th National Meeting of the Network of Women in Media, India, Bangalore, 8 February 2020.