Moving ahead on the Freelancers’ Initiative

Over the years, substantive thought and effort has been put in within the network to look into the rights, experiences and problems of freelance (or independent) journalists. Deficiencies and difficulties in payment have been among the major issues discussed. 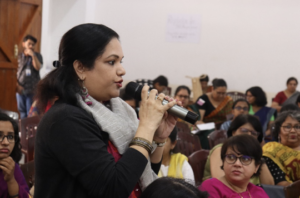 The huge difference between payments in the English and Indian language media has come up time and again during discussions. The situation has obviously not changed much. According to Shubhada Chandrachud, the writer seems to have no leeway to negotiate the terms of work and pay in the language media.

While the situation is particularly difficult for freelancers contributing to the regional language media, trying to make a living from freelancing is challenging irrespective of language. Concerns about payment are at the top of the list of problems that face freelancers, in terms of amounts as well as the long drawn out process often involved before dues are released.

All the panellists agreed that naming and shaming media organisations that renege on payments is not likely to be very helpful. In fact, going public with problems may only result in burning bridges.

The editors (and former editors) on the panel pointed out that the editor with whom the freelancer has interacted is often the person who is trying her or his best to get payments authorised and disbursed, even though they generally have little say in the way the organisation’s accounts department deals with payments. They suggested that it would be worth keeping this in mind while emailing editors about payments.

Vaishna Roy encouraged freelancers to send payment reminders to their editors so that they can follow up with the accounts department.

Those who occupy or have occupied the other side of the editorial desk also suggested that it is a good idea to try to clearly negotiate terms of work and pay. Whenever possible, put every mutually agreed term into an email and save it for the record. Always ask about the kill fee if the piece does not work out for reasons beyond the writer’s control, they said, because you are entitled to it. It is often difficult to ensure that a proper agreement, let alone a contract, is in place while commissioning every piece. That makes it all the more important that mutually agreed terms are recorded on email. That is a very important document to have, they said.

The discussion that followed included suggestions that the network, as a collective, should continue to bargain for fair and minimum pay, and timely payment – for example, within 30-45 days – for freelancers. It was also suggested that an important step that could be taken as a collective is to write to all major publishers/editors and appeal to their goodwill while demanding fair and timely compensation for freelance work.

Geeta Seshu, who has led research on the topic, said there is documented evidence of 90 attacks on journalists in the field between 2014 and 2019. Women journalists were targeted during the controversy over the opening of the Sabarimala temple to women, while investigating illegal sand mining and while covering many other such stories. She explained that the session was meant to elicit proactive reactions and doable solutions that can inform an effective resistance. The focus of the session, she said, is not so much on where the attacks happened or how but on solutions. 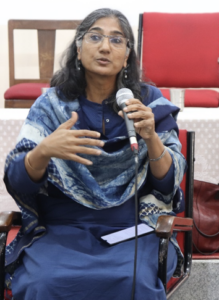 “We are trying to see how to develop a response system,” Shahina added. “Whatever happens, it is our responsibility and our burden. As individuals, we are left to fight cases for years. What can we do to ease the burden on individuals? The NWMI has intervened and helped at least a support system. Let us also discuss how to deal with legal issues, who to reach out to, etc.”

Thingnam Anjulika from Manipur said  she would like to link this discussion with the earlier one on Kashmir. “There was a time when there was a killing every day in Manipur,” she said, “just like what is happening in Kashmir. After a certain time, a mental block and insensitivity set in. That is when it becomes clear that people are affected by the conflict. Such feelings are often signs of Post-Traumatic Stress Disorder (PTSD). We have to be careful about this and figure out how to intervene and help. The NWMI has actually provided this kind of help well.”

Babie Shirin shared her recent experience in Manipur. “The CM has filed a sedition case against me, she said. I had published a statement that was based on a report on an India Today exit poll that said he came third in the poll. But the information turned out to be wrong.  So, we were summoned and the government decided to prosecute us using both the public prosecutor and the services of a private lawyer. The High Court stayed the case but it is still active.”

Durga Nandini provided information about an initiative by the Delhi chapter of the network “In Delhi, NWMI members met up and discussed what kind of support we could provide in such cases,” she said. “Who is the first person the journalist can call? Can the network create a bank of lawyers with contacts to help at such times? After that, the fight needs money. Should the NWMI consider fundraising?”

“Can we list legal and counselling help available for women journalists on the NWMI site?” asked Leena Reghunath. She explained that she received continuous threat calls after one of her stories in Caravan. “I had to go underground,” she said. “I went through psychological issues. I quit Caravan. At that time, thanks to a call, Nisha Susan helped me out by scheduling a counselling session for me. Now I want to help in turn. I am a lawyer. I can be part of a legal cell that NWMI sets up,” said Leena. 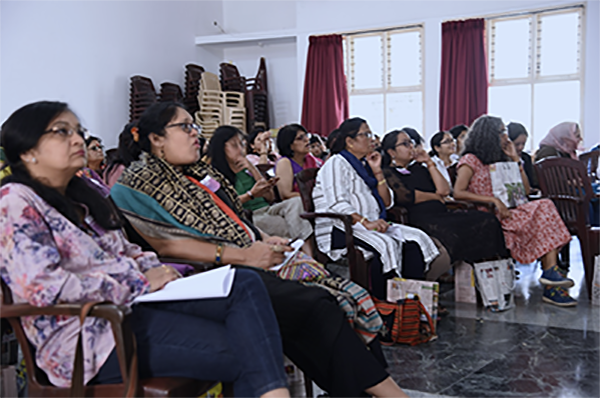 Others thought this was a good idea to explore, along the lines of the Media Legal Defence (MLD). “We can offer legal and counselling help. I became a lawyer during the course of my own case,” said Shahina. Discussing the possible setting up of such a mechanism, some participants pointed out that, while pro-bono work is good to have access to, solid institutional support is required. Discussions continued on how to create support structures, provide legal aid, access to insurance, etc.

The importance of the mental well-being of journalists was highlighted by Sonal Kellogg, “I am doing counselling sessions. I suggest that when we are doing difficult stories or series, we should go for counselling every 15-30 days. We could form a support system to push colleagues into counselling. I am also available as a counsellor.”

The challenges of setting up support systems was discussed. As B.Jayashree said, “Let us do a reality check. We need people who will stay for the long run. We have lots of volunteers when we start such a list but later everybody will fall off. I want to mention that during the protest in Bombay against the cutting down of the Aarey forest, 150 journalists were arrested in one day. We went to court, but we could not get six people to file the case. Nobody wanted to come forward and file a case against the government. P. Chidambaram represented us and we won. Getting an influential face to argue the case makes a big difference.”

Sumita Jaiswal from Patna cited the example of the sexual abuse in the children’s home in Muzaffarpur, Bihar. The government had banned coverage of the case. “I was wondering how to get around this ban. That’s when I made friends with a woman legal activist. If we can add our personal/professional contacts to the NWMI list that might help,” she said.

To conclude, it was decided that the following steps would be taken:

Ripples of the #MeToo movement

During the second wave of the #MeToo movement in India, several journalists and media women spoke out about sexual harassment at their workplaces. While the exact number of people who spoke out is unclear, some estimates put the number at 152. And among the women who spoke up are several members of NWMI. Many of them filed official complaints with the organisations the harassers were part of, or with the police. During this internal session, we took stock of where these cases were and discussed the way forward. The session also reflected on what justice looks like for survivors in different parts of the country. The Priya Ramani vs MJ Akbar defamation case is still in court. Akbar’s lawyers have been using several methods to denigrate her as well as other survivors who spoke out against him. However, one  positive aspect of the proceedings is that several journalists, including  NWMI members, have been supporting Priya in court by simply turning up and making sure that she is not alone and that she experiences solidarity from the community. The proceedings are reported either as articles or Twitter threads.

The case of several young journalists accusing Meghnad Bose of sexual harassment was taken up by The Quint, although the instances of harassment did not take place in their organisation. The Quint’s Internal Committee heard the case in 2019 and initiated punitive measures against Meghnad, including shifting him away from the head office, denying him a by-line for a set period of time, and avoiding video appearances by him, too, for a set period of time. While some members felt this was a good precedent and was proportionate, others disagreed. Meghnad won two Ramnath Goenka awards after the sexual harassment allegations were made, and this was seen as proof that he did not face any repercussions for his actions, according to many members.

Another case was that of KR Sreenivas, the former resident editor of The Times of India (ToI) in Hyderabad. While at least eight women accused him of sexual harassment and wrote to the ToI, asking the organisation to take action against him, no official action was taken. Sreenivas quit the organisation soon after – and landed a job as editor with DT Next soon after.

The victory achieved by an NWMI chapter was also discussed. The secretary of the Thiruvananthapuram Press Club in Kerala, M. Radhakrishnan, along with some lackeys, barged into the house of a woman colleague at night, assaulted her, her two children, and a family friend. The NWMI Kerala chapter took up this incident, protested in front of the Press Club and took the matter up with Kerala Kaumudi – the news organisation where both Radhakrishnan and the woman journalist worked. Radhakrishnan was finally arrested and let off on bail, but was sacked as secretary of the Press Club, and is currently facing an internal inquiry at his workplace. Most importantly, NWMI Kerala has been able to push for a policy against sexual harassment at the Press Club, and the formation of an IC.

NWMI Kerala chapter members Saritha Balan and Saritha Verma spoke about how this can serve as an example of the way the network can help members in the future – by coming together, being present physically on the ground, and putting pressure on those who can take action.