The Network of Women in Media, India (NWMI), held its 15th national meeting at the Indian Social Institute, a haven of greenery and peace amidst bustling Bangalore. As many as 125 network members travelled from 18 states and union territories across the country –  Andhra Pradesh, Assam, Bihar, Chhattisgarh, Delhi, Jammu and Kashmir, Gujarat, Haryana, Karnataka, Kerala, Maharashtra, Manipur, Meghalaya, Odisha, Tamil Nadu, Telangana, Uttar Pradesh and West Bengal – to attend the three-day meeting (7-9 February 2020), hosted by the Bangalore chapter of the network (NWMB).

For those who arrived early, a visit to one of the oldest newspaper offices in the city had been arranged, and members from across the country had the opportunity to interact with senior editors of the Deccan Herald and Prajavani on 6 February. See report on the visit here

As participants trickled into the venue, student volunteers from journalism schools in the city guided them to the registration desks and a hot breakfast and coffee. Alongside, an on-site exhibition put together by NWMB members showcased posters, banners, slogans, photographs and videos from the country-wide uprising against the controversial Citizenship Amendment Act (CAA), National Register of Citizens (NRC) and National Population Register (NPR) from December 2019 onwards. 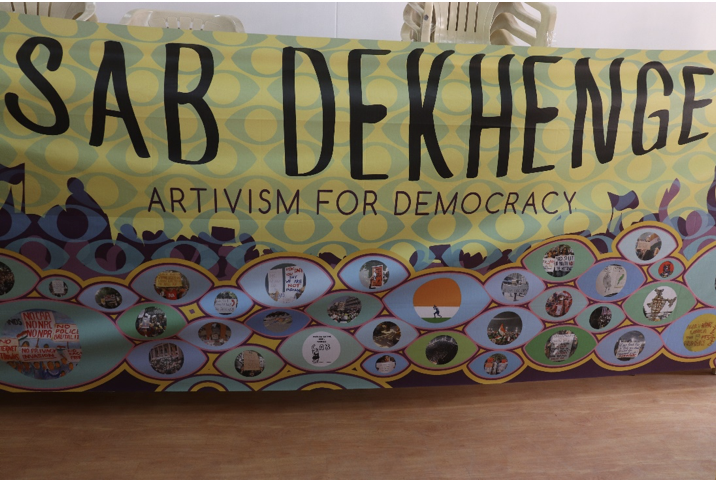 ‘Sab Dekhenge’, specially put together for the duration of the meeting, brought together an audio-visual representation of the ongoing, nationwide protests led by students and women against the Citizenship (Amendment) Act, 2019, passed by the Lok Sabha on 11 December 2019, and related official initiatives. 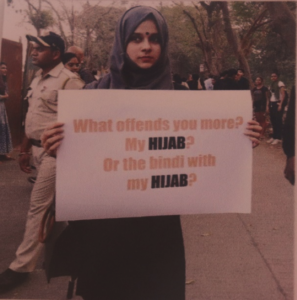 ‘Sab Dekhenge’ combined digital and physical images that recalled some of the sights, smells and sounds of resistance to undemocratic tendencies across the nation, with some flashes even from across the globe, over the last couple of months. The exhibition team attempted to capture snapshots that conveyed the scale, diversity, creativity and emotions of the spontaneous agitations. Public expressions of dissent against the CAA, the possibility of the extension of the contentious National Register of Citizens (NRC, already implemented in Assam) to the rest of the country, and the introduction of new features in the National Population Register (NPR) took the form of hand-made placards, banners and posters, dynamic installations, artwork, poetry, songs, slogans, skits and much more.  They cut across time, location and language, but also retained local flavours and earthy accents.

The process of collecting, collating and sifting through approximately 500 images, poems and videos was an interesting and deeply moving experience. Only a fraction of the treasure trove made it into the exhibition due to practical constraints. Given the wide dissemination of these images via multiple platforms, it was difficult to source the original artists whose creativity inspired a new wave of resistance. The selection of posters, collages, slides and songs on display during the exhibition was meant to convey some of the intensity and diversity of the protests. See report on the exhibition here. 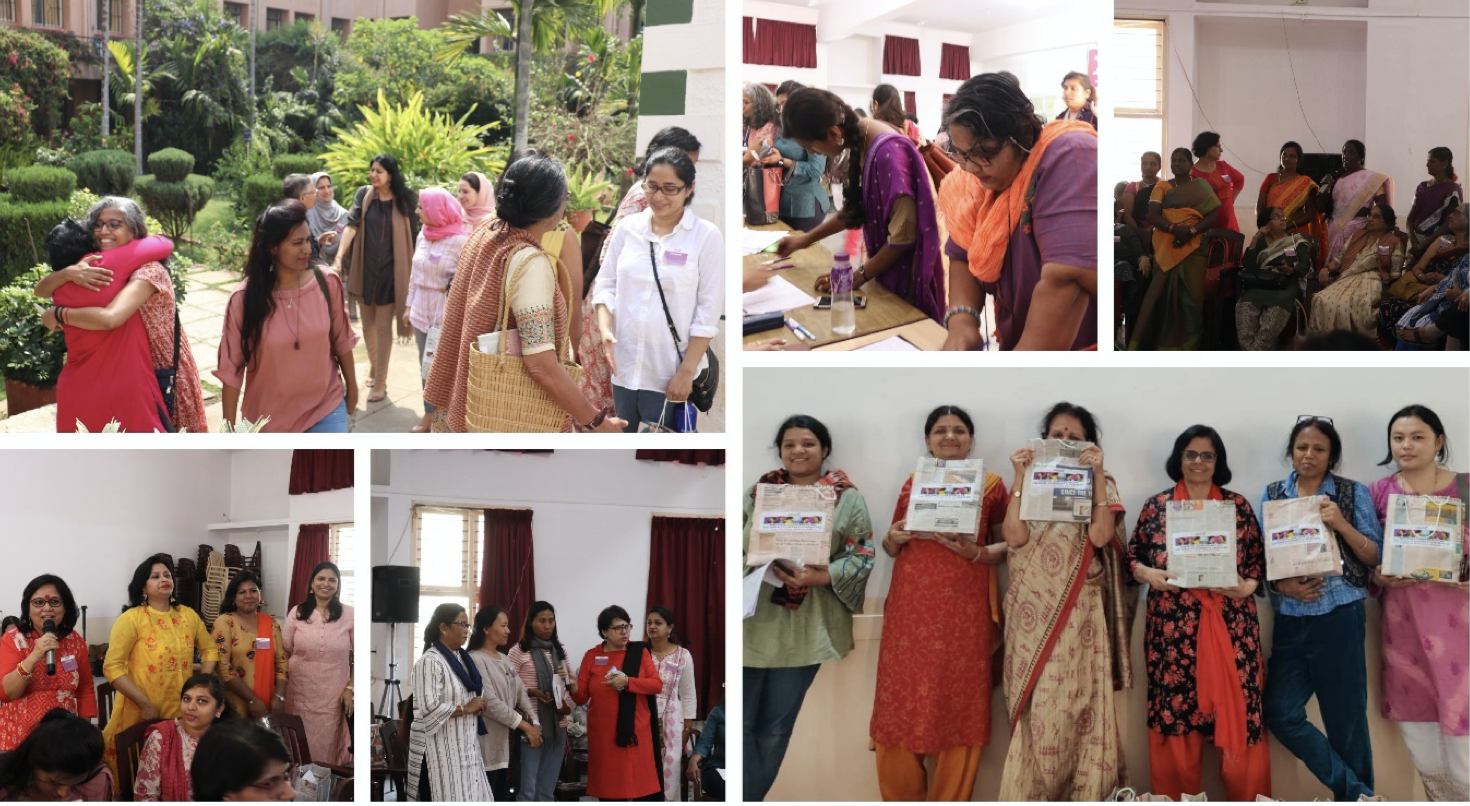 In keeping with NWMI tradition, the meeting began with participants sitting in a large circle and introducing themselves briefly, allowing faces to be matched with names on the Yahoo and Telegram groups which enable regular, ongoing, virtual interactions among members from across the country. New members were welcomed into the fold and older members renewed bonds built up virtually – and at earlier meetings – over the years. 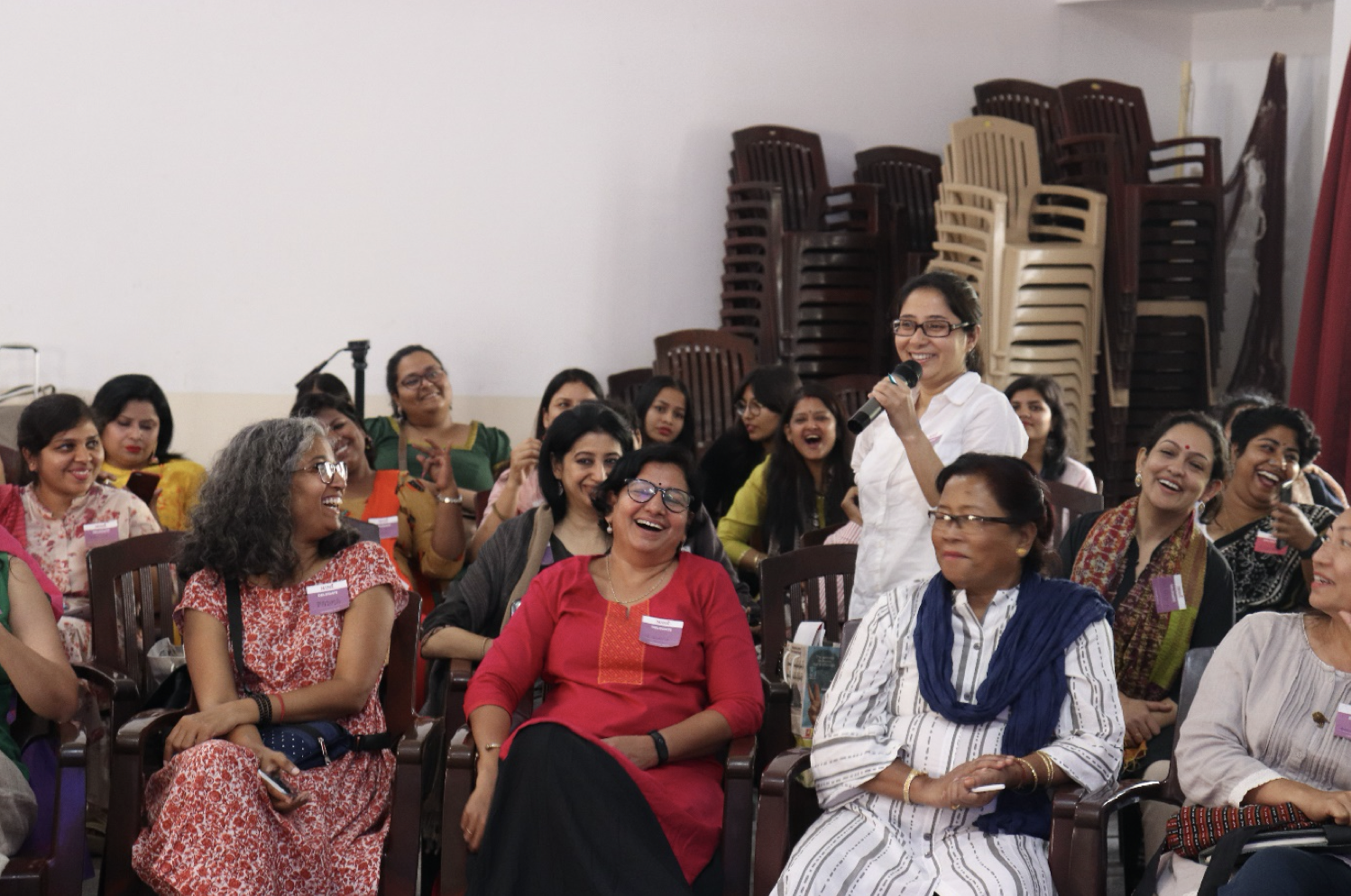 Mahithi Pillay made a presentation on the newly designed NWMI website on behalf of the team which includes Sandhya Srinivasan and Anjali Mathur. The website, launched in 2003, was the sole public face of the network for and source of information about and for the network for many years, until social media platforms such as Facebook, Twitter and Instagram helped expand its online presence. The new interface is expected to be more user friendly and interactive, and therefore more useful to members.  It will also serve as an archive that provides the history of activities, documents, photographs and other material generated by the network over the past 18 years. The possibility of adding regional language content was also discussed.

Ammu Joseph and Padmaja Shaw introduced the Global Media Monitoring Project (GMMP), a unique five-yearly exercise conducted by a wide range of volunteers across the world.

They explained that the GMMP is the largest and longest longitudinal study on gender in the world’s media. It is the leading advocacy initiative in the world aiming to change the representation of women in the media for the better. It is unique in involving participants ranging from grassroots community workers to university students and researchers and, of course, media practitioners in the media monitoring exercise, with everyone taking part on a voluntary basis.

The GMMP was first conceived at the landmark international conference, ‘Women Empowering Communication’, in Bangkok in 1994. The idea was to conduct a one-day study of the representation and portrayal of women and men in the world’s news media in order to provide a snapshot of gender representation in the news media – at the country level and globally. Section J of the 1995 Beijing Platform for Action on Women and Media remains the touchstone for the GMMP, which is directly related to strategic objective J.2: Promote a balanced and non-stereotyped portrayal of women in the media.

The first GMMP took place in 1995. Every five years since then, GMMP research has taken the pulse of selected indicators of gender in the news media, examining the ratio of women’s presence in news content in relation to men and the prevalence of gender bias and stereotyping in news media content. The fifth study in the series was conducted in 2015 by hundreds of volunteers in 114 countries around the world.

The NWMI coordinated the monitoring in India in 2010 and 2015 and was getting set to do the same for the 6th GMMP, scheduled to take place during the month of March 2020 (but delayed due the COVID-19 pandemic). As many as 120 countries had signed up for the GMMP 2020 as of February.

Ammu and Padmaja called for volunteers to undertake the one-day monitoring of print, broadcast and digital news media, including Twitter, in English, Hindi and other Indian languages.

A workshop reviewing the GMMP monitoring methodology was held in the afternoon, side by side with other breakout sessions, to familiarise volunteers with the coding sheets and other aspects of the monitoring exercise.

The 12th National Meeting of the NWMI in Hyderabad was organised by a team from the Hyderabad chapter that included: C Vanaja, Padmaja Shaw, Anuradha Raparla, Yashoda Vanga, Y Padmasri, E Agitha and K Arunajyothi. The team was assisted by the following student volunteers from Osmania University:

Students from journalism and media studies from the following institutions participated as volunteers:

Contributors to this Report 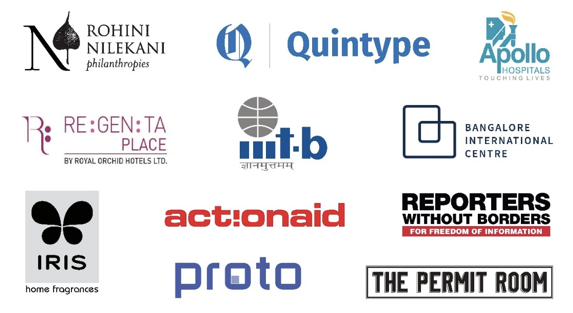 In keeping with the tradition of the NWMI, the national meeting was self-funded and also supported by donations by members and the following institutions. We are grateful for their generous support.

The NWMI is also grateful to the Indian Social Institute, Bengaluru, for providing the congenial and convenient venue for the meeting, and for their cooperation and accommodation, which contributed in invaluable ways to the smooth and successful conduct of the meeting. We greatly appreciate the fact that the ISI continues to be affordable and allows for freedom of speech, a rare combination in the present time.