The afternoon saw participants choose from a range of workshops meant to build skills, raise awareness or get to know more about a subject from experts in the field.

Getting ready for the Global Media Monitoring Project 2020

This session familiarised network members who wished to volunteer for the GMMP 2020 with the monitoring methodology and coding sheets involved in the process. (Details about the GMMP were presented during the opening session of the meeting and are available at the beginning of this report.)

Media entrepreneurship: How to start and sustain an enterprise

This session, led by NWMI members who are media entrepreneurs, explored various aspects of launching and sustaining media start-ups, based on their own experiences and learnings. Meera K began by talking about how to prepare a business plan for a media enterprise. The first step, she said, is to define the core idea for the venture and understand one’s own motivations for starting up. The venture could be driven by passion or because one does not want or is unable to opt for formal employment. 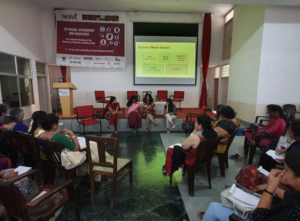 Regardless of the reason, one has to first ensure the feasibility of the idea. It is essential to understand what the market opportunity is – what is the problem one is trying to solve and who would be ready to pay for it (with regard to media enterprises, customer segments include readers, subscribers, advertisers, etc). The process of developing a business plan also involves identifying the value proposition of the product, market research, SWOT analysis, and preparing an execution plan (finance, marketing, operations). In addition, Meera explained various revenue models – for profit and non-profit – that media business can adopt. A panel discussion followed, with women media entrepreneurs sharing their know-how and views. Sandhya and Dhanya talked about their journeys as ‘accidental’ entrepreneurs. Aparna and Meera focused on why they had started up – i.e., having found gaps in the women’s publications and civic journalism spaces, respectively. The discussion also covered issues such as fund-raising, the special challenges faced as female entrepreneurs, and the art of managing teams. Among the aspects of entrepreneurship that participants wanted to discuss were the challenges of raising the initial capital to fund the business, the percentage of costs that could possibly be covered from subscriptions, and the effectiveness of non-journalism related services (such as training, consulting and/or events) in furthering monetisation. Participants also raised the question of how to find like-minded people with critical skill sets like marketing, design and technology, which journalists-entrepreneurs may not necessarily possess. The session concluded with the participants breaking out into four groups to prepare and present quick business plans using a Business Model Canvas template for their own ideas.

Digital branding and the newsroom: Reclaim control of your website with a flexible page builder

“Why go digital?” was a legitimate question at a time when newspapers were thought to be able to survive computers and online publications. But today 68 percent people say they get their news from smartphones, and 31 percent say they source news only from mobile devices. The workshop suggested ways in which media houses could meet their audiences where they were, in terms of content, design and discovery. Thinking through getting to know your audience and the story and reclaiming your website in with flexible CMS is the way to go, they suggested. A short demo of the Quintype and Metype CMS was presented.

The objective of the session was to enable participants to explore the potential of digital media in regional language journalism. It began with a run-through of some key statistics about the increasing production and consumption of digital content worldwide, including in India. Next, the three distinct but interrelated processes of a digital media strategy, consisting of production, distribution, and consumption, were examined. The resource person highlighted the need to sufficiently think through each of these processes holistically and in advance for impactful social change. This requires ideating on the target group, their socio-economic situation, their current media consumption practices, and the local culture. Three critical skill sets required for any meaningful impact – technical, craft, and social skills – were looked at. Technical concerns the audio and video quality of the content. Craft deals with making the content engaging and interesting. Finally, social skills relate to issues of power and social justice in general, and questions such as who is telling the story, who is being made visible and what stories to highlight, in particular. A wide-ranging video clip including different genres was played and analysed in a participatory exercise to deconstruct each of the three skills evident in them.

Workshop participants were from diverse backgrounds and geographies, ranging from Orissa and West Bengal to Andhra Pradesh, Karnataka and Tamil Nadu. They brought their experiences and perspectives into the session, adding richness to the workshop, which enabled additional learning for all participants. The women working with Navodayam magazine in Andhra Pradesh shared their experiences as rural reporters and Dalit women. They shared some of their most difficult and most satisfying stories.

The resource person challenged participants to add digital content to their reports. They saw the possibilities and said that they would certainly work on adding this dimension to their journalism. So far, they had only used digital resources for news gathering, not for dissemination. The group was also linguistically diverse. The facilitator, Cynthia Stephen, was able to make the workshop meaningful for everyone by translating back and forth between English, Telugu, Kannada and Hindi.

Sunanda Mehta, senior journalist and author of The Extraordinary Life and Death of Sunanda Pushkar, began by clarifying the definition of the term ‘defamation’ in the context of journalism and other writing, and explaining that a defamation case can be filed under both civil and criminal law. According to her, the crux was that, irrespective of the law used, what is most important is the intent with which the piece/story had been written, and that is what usually determines the outcome of the case in the court.

She then explored the topic through her own experience with the book on Sunanda Pushkar, which was “as controversial as they come,” as she put it. With warnings and threats peppering the writing process, the book went through three legal readings, with almost 100 points highlighted by the lawyers, for which she had to furnish credible sources as back-up or evidence of the information already being in the public domain. What held her in good stead, she said, was the intrinsic intent of the book, which was to portray the life of her protagonist in an unbiased, non-judgmental and honest manner, consciously eschewing sensationalism when the narrative could very easily have fallen prey to it. Also, she said, protection came from the fact that almost all the interviews were recorded, and she could not be accused of misquoting sources or twisting the words of the people quoted in the book. 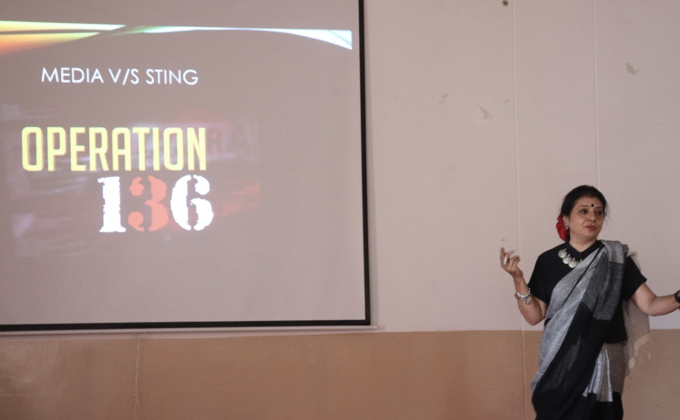 Mehta also spoke about the differences between newspaper organisations and publishing houses, suggesting that the former were much more likely to back a writer in case of a defamation case. This made it all the more important for authors of books to be very careful with their subjects and final manuscript. Many examples of defamation notices served to different publications and the way they were dealt with were discussed. The issue of press freedom vs. the law and the fairly recent phenomenon of trial by media and its impact on actual trial were also brought up in the discussion.

The informative session ended with a Supreme Court lawyer on call from Delhi answering queries from participants, making it even more interactive. Questions sought clarity on a range of issues, from the application of laws to the digital medium to the rights of independent journalists.