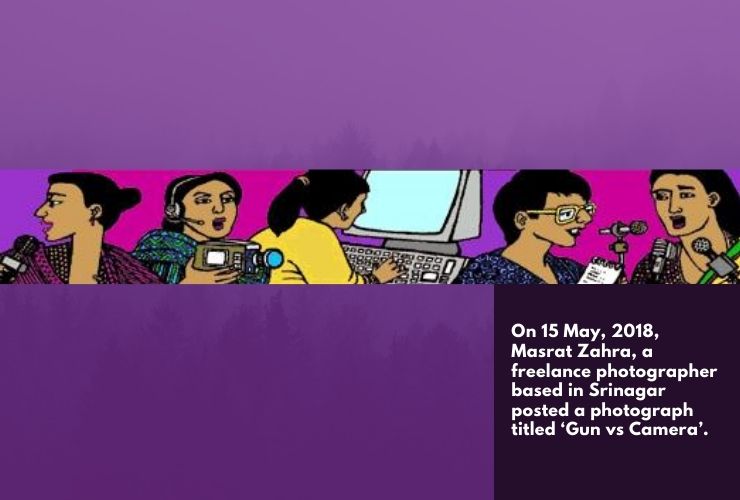 The NWMI stands in solidarity with Kashmiri photojournalist Masrat Zahra, who is being subjected to online abuse and intimidation for carrying out her journalistic duty.

The Network of Women in Media, India, stands in solidarity with photojournalist Masrat Zahra, who is being subjected to online abuse and intimidation for carrying out her journalistic duty.

On 15 May, 2018, Masrat Zahra, a freelance photographer based in Srinagar posted a photograph titled ‘Gun vs Camera’. The photograph, which shows her at work, covering an encounter between the Indian Army and a group of militants in Kachdoora, Shopian on April 1, 2018. While the encounter at Kachdoora was raging, the police were not allowing photojournalists to go near the encounter site and take pictures. Clashes had also erupted between protesters and the armed forces. Masrat, along with fellow photojournalists, managed to enter an orchard and started taking pictures of the gunfight. It was while taking pictures in the orchard that one of her colleagues clicked a picture of her in action, which later became the centre of controversy. In the photograph, Masrat is seen amid four army personnel while covering the gunfight. She was also injured in the knee and shoulder on that day.

Soon, Masrat’s post received a comment labelling her as a ‘Mukhbir’ or informer. This defamatory screenshot referring to Masrat as an informer who works for the army got viral within no time. Such vicious and irresponsible labelling of a journalist in an already polarised political climate is dangerous and must be unequivocally condemned.

Multiple Facebook pages shared the photo, used sexist and abusive language and called her a spy, traitor and collaborator. This was followed by online harassment in the form of threats, abuses and intimidation.

The online abuse and threats have created immense fear and mental stress for Masrat, besides severely compromising her safety and security. Masrat is a student of central university of Kashmir studying convergent journalism and also works as a freelance photographer, contributing to the Hong Kong-based Editorial Photo Agency. She is amongst the few women news photographers in Kashmir and is committed to providing the very important women’s perspective to the ongoing conflict.

The NWMI is deeply concerned about the threats and abuse directed at a young woman carrying out the important journalistic duty of informing the public about current happenings in Kashmir.

For a video of Masrat and other women photographers in action, click here

Purveyor of hate speech must not be appointed consultant to Lok Sabha TV: NWMI