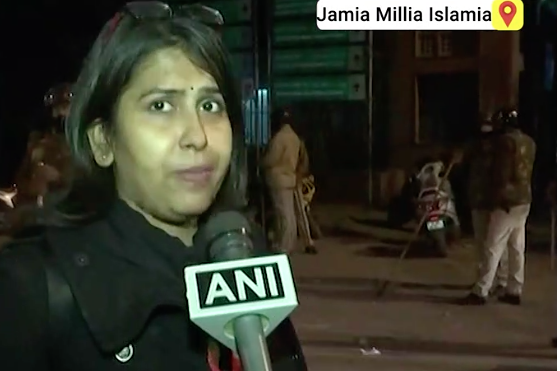 The Way Forward for Women: Capture the Booth!

The Network of Women in Media, India, strongly condemns the brutal assault on students participating in protests, and mediapersons covering the protests, over the Citizenship Amendment Act, 2019, in Assam as well as in Delhi, Aligarh and other cities. The it attacks, by both government security forces and unidentified protestors, serve to curb citizens’ freedom to express their opinions on current affairs and journalists’ freedom to report events fairly and accurately.

On December 11, 2019 security personnel stopped media coverage of anti-CAB protests in New Delhi. On December 14 CRPF personnel entered the office of Prag Television channel in Guwahati and thrashed the staffers there without any provocation. The staff members were in their office, unable to go out due to the curfew. Yet, a posse of CRPF personnel forcibly entered and beat the staffers who tried to protest police presence in the office.

In Delhi and Aligarh, too, there was similar brutality against journalists documenting police violence on students. Bushra Sheikh, a journalist with the BBC, reported that a policeman pulled her hair, verbally abused her and hit her with a baton while she was covering the students’ protests in Delhi on December 15. A now-viral video shows police at Jamia Millia Islamia beating Maktoob Media journalist and Jamia student Shaheen Abdullah with batons on the same day. Students and faculty of Jamia have also narrated how police entered the campus and perpetrated violence on the students.

Police also perpetrated violence on journalists covering the protests in Aligarh Muslim University and in Jamia Millia Islamia on December 15. They beat mediapersons, snatched and/or forcibly switched off their cameras and mobile phones while they were in the midst of recording the police assault on students. On December 17, police in Srinagar beat up Azan Javaid of The Print, along with another journalist, Anis Zargar, while they were covering a protest. They also snatched Javaid’s phone and he abused him. Javaid and Zargar also observed that the police detained students who were simply walking to college, not participating in any protest.

We note, with concern, that among others who also heckled and intimidated journalists were persons who claimed to be students but appeared to be distinctly older persons with a vested interest in disrupting reportage.

The government must immediately initiate action against the police and CRPF personnel involved in these incidents.

The NWMI would also like to call attention to one of the longest internet shutdowns in a democratic nation: the shutdown in Kashmir, which has continued uninterrupted for over four months (to date). India now has the dubious distinction of being identified as the Internet Shutdown Capital of the world, having suspended connection to the internet in multiple states and some targeted districts of states over the past week.

It is important to note that internet shutdowns in Kashmir, through parts of the North East region and in Uttar Pradesh have caused immense hardships to people, fuelled rumours and severely restricted the flow of information for both citizens and the media. The recent physical attacks on citizens and media professionals have only served to exacerbate the situation. The states of the North-East have additionally faced mobile phone shutdowns over the past week. While landline services were suspended for a fortnight, mobile phone services were suspended in Kashmir for over two months. Such communication lockdowns curbing the freedom of expression and right to information of citizens are of a piece with the growing tendency to muzzle press freedom across the country.

In this context we also demand that the government withdraw its December 12 advisory asking private television channels to desist from broadcasting content ‘that could incite violence or cause law and order problems’. As media professionals we do not condone, let alone support, media content aimed at inciting violence. But vaguely worded advisories are prone to misinterpretation and misuse leading to censorship, on the one hand, and a chilling effect on press freedom, on the other.

In a democracy, the government is supposed to uphold and protect freedom of expression and media freedom. Only then can the media play its legitimate role within a democracy as the Fourth Estate, exercising its responsibility to serve as a necessary watchdog of the government and society on behalf of the public. The NWMI reaffirms its commitment to media freedom, which is an essential part of the freedom of expression and right to information guaranteed to all citizens by the Constitution of India.