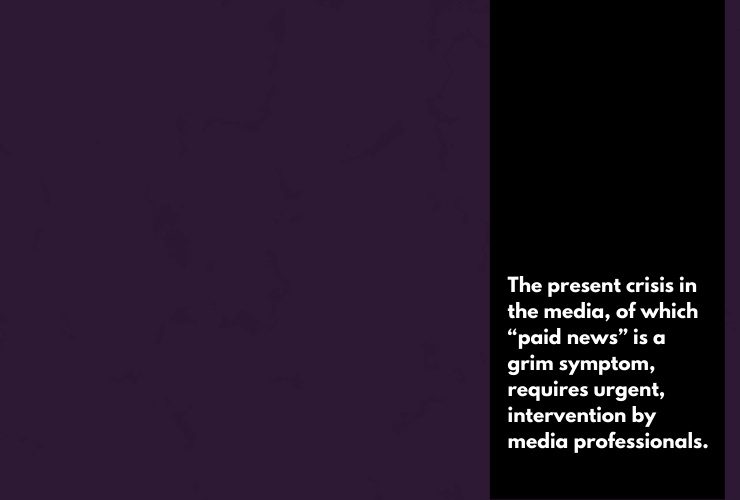 NWMI condemns the phenomenon of “Paid News” at Kozhikode meeting

Nearly 60 women journalists from across India and an equal number from different parts of Kerala met in Kozhikode from 5 to 7 February 2010 for the eighth annual conference of the Network of Women in Media, India (NWMI). This represents the first gathering in Kerala of such a large number of women working in a variety of media in multiple languages.
The NWMI is a national network that aims to provide a forum for women media professionals to share information and resources, exchange ideas, promote media awareness and ethics, and work for gender equality and justice within the media and society.

The main theme of the three-day meeting was the media and democracy. As professional women in the media, we strongly believe that the present crisis in the media, of which “paid news” is a grim symptom, requires urgent, serious intervention by media professionals working together to safeguard the principles and values of journalism and the credibility of the news media, which are both critical factors for the effective functioning of our democracy.

A panel discussion on this issue was one of the main public events organised by NWMI in which eminent journalists Mrinal Pande, the new Chairperson of Prasar Bharati and T.N. Ninan, Chairman and Editorial Director of Business Standard, as well as editors of several leading Malayalam newspapers, participated. They spoke about the phenomenon of “paid news” within the context of the ongoing deterioration of ethics and standards in the media, suggested several steps that could be taken to curb this trend including naming and shaming those publications that resort to such practices and consumer resistance to media that is selling its viewers and readers short.

Well-known social and political activist Aruna Roy, who inaugurated the conference, also spoke about the need for a more constructive intervention from the Fourth Estate on several key issues confronting the country today including attacks on tribals and minorities. She said that society looked upon journalists as “empowering agents” in a democracy and that any campaign for human rights was incomplete without the participation and support of the media.

During the conference, issues such as the Kerala media’s coverage of terrorism as well as the practice and politics of veiling and unveiling, especially within minority communities, were also discussed. Likewise the apparent disinterest of much of the mainstream media in issues related to local self-government raised questions about the media’s role in promoting democracy.

Another major learning emerged from several presentations on the current state of what is commonly known as “the Kerala model of development,” issues concerning women’s health in Kerala, myths and realities about women’s status in Kerala, what decentralised local governance and anti-poverty schemes have meant for women in the state. These insights emphasised the complexity of any society and the need for journalists to go beyond demographic data and other statistical indicators.

NWMI statement at Manipur: We need to learn from the northeast

Statement against sexist cartoon in Lakbima