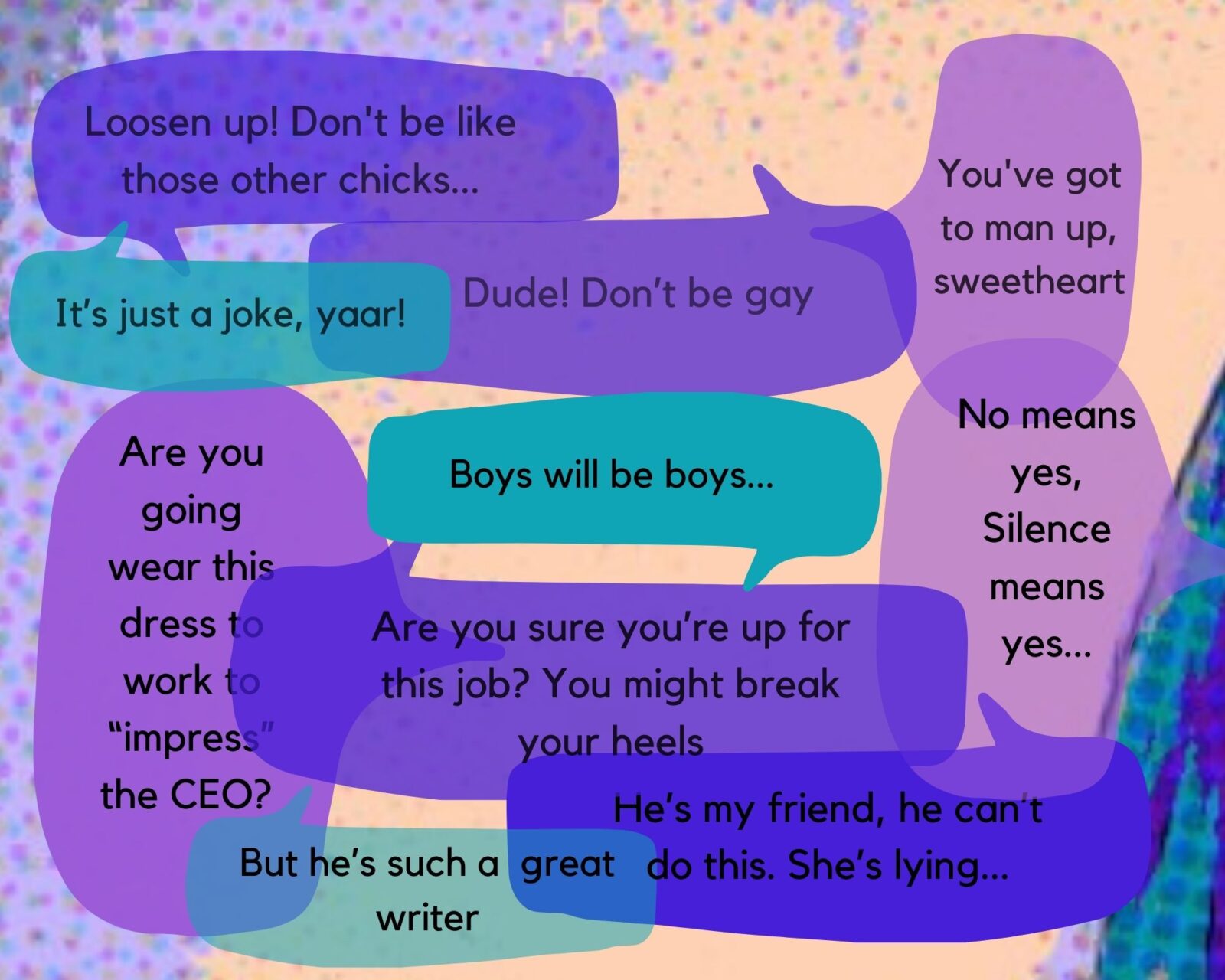 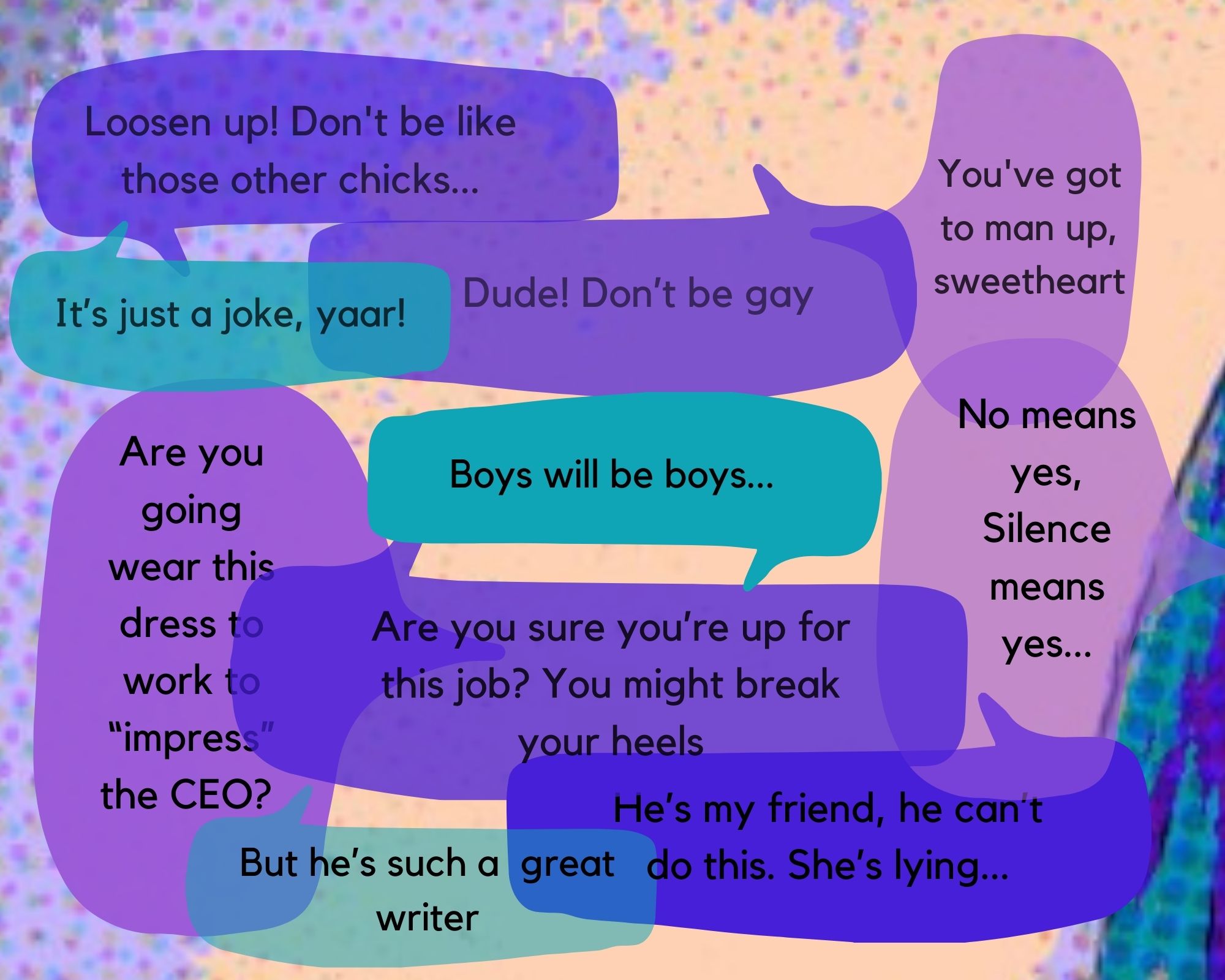 One tweet at a time, the so-called ‘stalwarts’ in the Indian media industry have been called out for the varying degrees of sexual harassment they have piled on the women in newsrooms. The list has only grown and it includes former editor and BJP politician MJ Akbar, the Minister of State for External Affairs. He was later asked to step down as Minister.

The #MeToo storm which began in October 2017, will continue to chart its own course. It is only a matter of time before more skeletons rattle out of the ivory towers. Given the genuine confusion and deliberate misunderstandings around what constitutes sexual harassment, it is worth examining structural deficiencies of the workplace which enable sexual harassment.

In this piece, we want to ask how these toxic, sexist, harassing, rapist men have continued to thrive.

Two parts of ‘boys will be boys’

One part ‘male privilege and entitlement’

Thousand parts ‘he’s my friend, he can’t do this. She’s lying’

A million parts ‘he’s such a  great writer’

All of these answers are rooted in the culture or the workplace, which is also built on the foundation of sexism. The reckoning has come and it is not limited to examining individual incidents of sexual harassment but to question the environment within which harassment occurs and thrives. Some women have had to wait 30 years for a #MeToo moment to be able to publicly speak about experiences which they had bottled up or only shared with a few trusted friends or colleagues.

If we are to examine the deeply problematic culture of our workplaces, we must begin by looking at ‘workplace banter.’ It is a term often used by apologists and defenders of sexual harassment as being the “heart and soul” of a “healthy office.”

All kinds of banter exist at the workplace, casual ribbing, or a form of generalist insults, all of which feel like jokes to most people involved. Banter can become an informal structure through which camaraderie develops and inter-professional relationships are negotiated.

What happens when the banter is sexist, sexually explicit, casteist and homophobic? This banter is unacceptable because it tends to be ‘humour’ at the expense of a particular gender, caste or social minority. It is that which first generalises characteristics about members from such groups, then goes on to undermine their capabilities and amplifies certain qualities as being less desirable for the sake of humour.

Here are some examples:

Sexist banter is extremely degrading and should not be justified as something necessary. There are no laughs to be had here.

In the modern newsrooms, lines often get blurred to create a “cool vibe,” and to say that it’s not as staid and claustrophobic like “those corporate types offices,” but the real message that women often get is that upholding boundaries won’t help you.

What happens when women speak up and do not participate in such banter? They are penalised. Women get pushed around departments because they are “too boring” and “too serious” for not being able to “take a joke.” If women speak up, there is a high chance that the “corrective action” that is taken doesn’t benefit them, instead ends up isolating them from the rest of the workplace.

The “complainants” are seen as “prudes” “troublesome” “killjoys” “feminazis” “militant” “serious” and therefore not invited to join the big sexist party. The sexist party by itself does not change. The banter does not stop, the oppressive structure does not disintegrate or get reformed. The boys’ club continues to indulge in sexism, it just might not be done in front of those who resist. And for speaking up, women are often penalised by being excluded from opportunities.

The onus of fostering a truly equal, yet fun workplace has to rest on the shoulders of men who must resist the temptation of humour based on gender or sex. And if that’s too ‘boring’, then let’s all be ‘boring’ together.

*Vishnupriya Bhandaram is digital editor at the Economic and Political Weekly