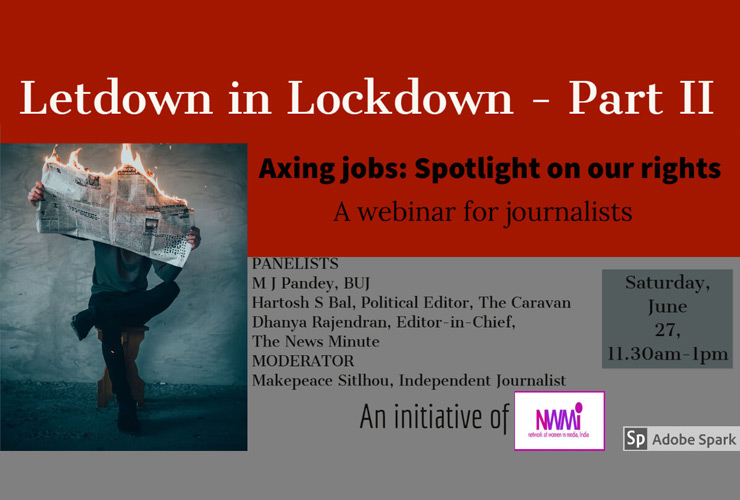 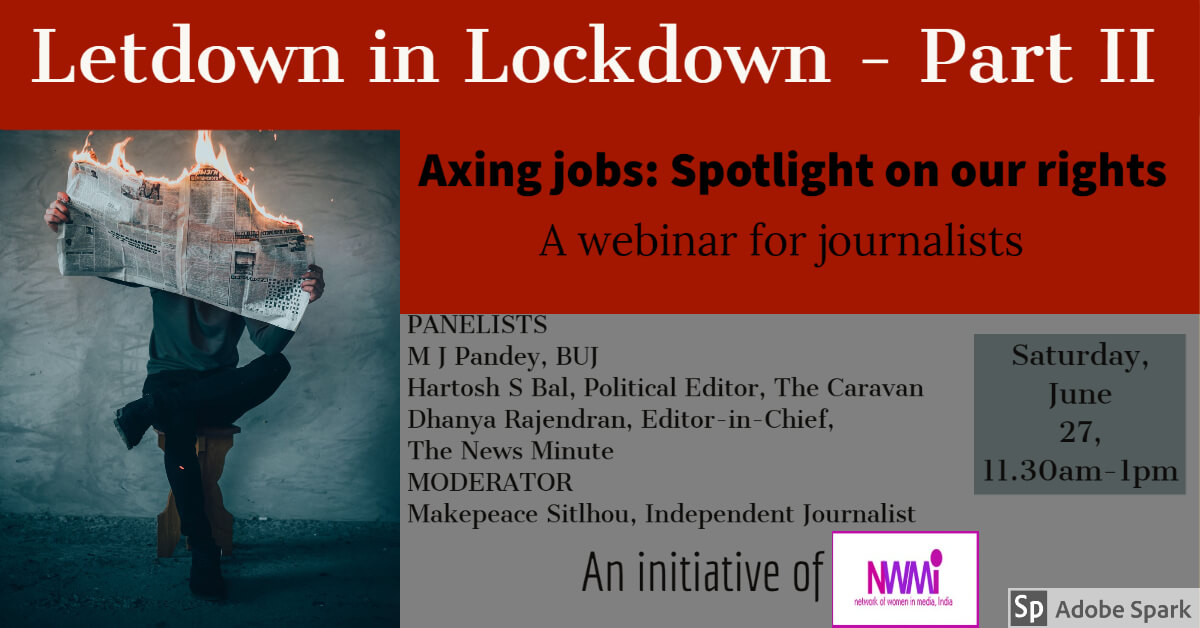 The way in which journalists and other workers in the news media are being laid off is condemnable. All media houses – print, television, digital – are currently doing badly in terms of revenue. However, the methods used to inform employees that they are being let go are horrific.

NWMI Webinar 2 posterAccording to Dhanya Rajendran, The Times of India (TOI) made use of WhatsApp video calls to ask employees to send in their resignations, obviously to ensure that nothing is on the record. The media has reported extensively on upheavals and unethical practices in other industries but has been quiet about similar processes in our own industry, possibly because most media houses are complicit.

Hartosh Singh Bal, who had fought a high profile legal battle against his former employers for terminating him unceremoniously, pointed out that the manner of sacking – unethical and without dignity or respect – is not new; in fact, it has become an established industry practice over decades. He suggested that organisations across the board must be questioned about the basis for these layoffs, their plans, revenue projections and how they select who to let go.

He cautioned that any legal fight against the system is usually long and lonely even though community effort is what is required. People might extend support initially, there will often be a response if and when you win or lose but, in the interim, you are on your own, he said. The legal battle requires a dedicated set of lawyers who are willing to work on it long-term, with due follow-up. He stressed that it is important to persist with the struggle.

He also pointed out that it would be unfair to expect a person who has been laid off to speak up openly while he or she is worried about their next job. Mid-level journalists are the most vulnerable because of their economic situation. So such battles will have to be led by those who still have jobs, he said. The onus to support and speak up is on colleagues in the industry.

MJ Pandey highlighted three disruptive moments for the rights of journalists that it was important to be aware of: the formation of the Indian Federation of Working Journalists in the 1950s; the contract system first brought in by Bennett, Coleman and Company (publishers of The Times of India, etc.) with the launch of a second English broadsheet, The Independent, in the 1980s; and the victory won by working journalists in 2014 when the Supreme Court of India upheld the validity of the recommendations of the Majithia Wage Board.

According to him, today the rights of journalists in the legacy media – whether permanent or contract workers – are well defined, with laws like the Working Journalists and Other Newspaper Employees (Conditions of Service) and Miscellaneous Provisions Act, 1955, the Industrial Disputes Act, 1947, and Industrial Employment (Standing Orders) Act, 1946, applicable to them. He suggested that these can be used to successfully challenge the violation of journalists’ rights. The due process is clear, he pointed out, but managements seek to circumvent it.

Compensation for retrenchment, which ought to be 15 days of pay for every year of service, is hardly ever given. Often, managements do not provide gratuity either. If an enterprise is covered by Chapter 5b of the Industrial Disputes Act, under Section 25N, if the organisation wishes to retrench even a single person it needs to make an application to the appropriate authorities 60 days earlier. This procedure is also not followed. These are the ways in which the due process is defeated, he explained.

Often, even when they know their rights, journalists may not be willing to fight for them. Pandey was of the opinion that the intelligentsia that makes up the journalist community do not have the appropriate emotional ecosystem conducive to fighting these battles. He pointed out that it has also become the norm for professionals to think that joining unions would be detrimental to their careers. This is both the cause and the effect of the fact that, while newspaper owners are united, employees are fragmented.

He pointed out that, earlier, composite unions were in place, structured in such a way that one union in the establishment would represent employees from the printing press, the administration, the marketing department and journalists. In the 1980s, when printing presses moved to locations away from newspaper offices, these unions disintegrated.

New technology is thus changing interpersonal relations within the industry, he said, pointing out that the management is always looking to casualise labour. According to him, the changes in the way news is produced and consumed at present is a direct result of “pressures from above”. The Indian Newspaper Society (INS) is a powerful body, he pointed out. Editors have more or less become agents of the management, he said, unlike in the 1950s when they often led unions. Concurrently there is a casualisation of labour across the industry. There needs to be collective opposition to these systemic problems, he said.

In the 1950s, the IMWJ comprised editors; when the Press Commission was set up it was headed by an editor. The distancing between editors and journalists’ unions began in the 1980s, he said. There has also been a rift within and between unions along political lines. He pointed out that the larger trend resulting from all this is to discredit collective bargaining.

According to Pandey, the problem has to be grasped at three levels – the practical, the philosophical and the emotional – in order to take a stand and make an impact. There have to be new forms of cooperation. The old union model is not working well and we do not yet have a new model. So individuals are left to face organisations on their own.

Hartosh Singh Bal pointed out that, according to Section 16.2 of the Working Journalists Act (WJA), any contract that diminishes rights flowing from the Act is illegal. And this law extends to journalists in television and digital media, too, even though, so far, they have been seeing themselves as a “class apart”. Whatever rights are available to Wage Board workers are also available to contract employees, he explained. So, an editor is entitled to six months’ notice and a journalist to three months’ notice.

Since 2014, when the SC upheld the Wage Board, even those under contract are entitled to variable pay dating back to 2011, no matter what the contract stipulated. Employees belonging to Groups 1-4 can claim variable pay at 35 per cent of their basic salary, and those belonging to Groups 5-8 can claim it at 20 per cent. However, he warned, once an employee resigns, he or she will not have the chance to claim this money.

According to Pandey, cases have been filed in Mumbai on behalf of those who were on contract and had subsequently retired. Once these come to fruition, there will be an avalanche of cases claiming these dues, he said. Even those currently on contract have not claimed their goodies, fearing that their contracts will not be renewed. However, he warned that the new labour codes are diluting the essential provisions of the WJA and are not being challenged.

Hartosh Singh Bal underlined the importance for journalists to keep up with these laws, informing ourselves of our rights and working on them while we have the security to do so. Only turning to such issues when a crisis hits us is not going to change the situation, he said. The process must be ongoing.

To resign or not

Hartosh suggested that the golden rule is: never resign. Once an employee resigns, he said, he or she forfeits all rights. According to him, in the worst case scenario, it is better to get retrenched and see if the management is going to pay up the mandatory dues. He cautioned that it would be extremely difficult to mount a defence after resignation.

As for pay cuts, he said, there is no provision under the law to cut wages under any crisis. If the excuse is that the employee has forfeited dues because of misconduct of some kind, it is important to understand that unless an inquiry is conducted and the person is found guilty, compensation cannot be held back as punishment. So a demand has to be raised with the company to restore the salary. If that is not done, employees have to write to local Labour Commissioner to intervene and start conciliation proceedings.

From the HR perspective, he said, media houses have a larger, structural problem: they are not built with any margin of safety to withstand emergencies. And since they are largely promoter-driven, the services of management professionals are not utilised. Inhouse HR personnel are usually brought in later in the decision-making process and are generally reduced to being order takers. As a result, the best HR talents stay away from media companies. According to him, this is true of other verticals as well. Those who do join and stay on are essentially individuals willing to just execute decisions taken by others. As a result, he said, there is no talent readiness in media HR departments to handle a crisis like this.

Baishya added that mushrooming growth in media enterprises has resulted in a non-sustainable model. In the training and educational field, multiple institutes are doling out diplomas which makes the entry barrier low. So, HR is not thinking on the lines of growth and career development. They are not set up for long-term success.

According to him, this makes the conversation about the role of HR in the context of the retrenchment of journalists irrelevant. There is a specific law in place that has to be understood. There is no other profession that has the equivalent of the Working Journalist Act. This is because this profession has a certain role that is essential to the functioning of democracy.

An interactive session followed, with panellists taking questions from participants.