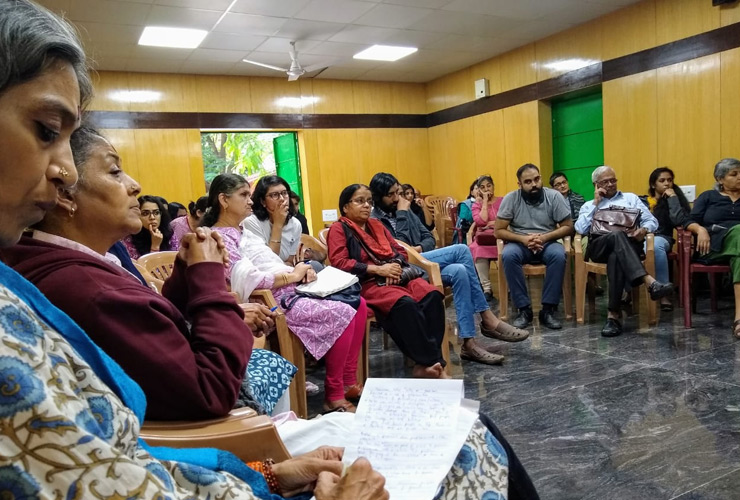 September 2019 will mark a year since the flood of revelations of sexual harassment in the Indian entertainment and media industry. At a meeting organised by the Network of Women in Media, Bangalore and the Gamana Women’s Collective at the Press Club of Bangalore on August 12, 2019. Ashwini Tambe, University of Maryland, and Editorial Director, Feminist Studies, looks back at the promises and challenges of the movement against sexual harassment in a global context. The perils and strengths of social media-driven activism, and more specifically, the backlash against #MeToo were also discussed. 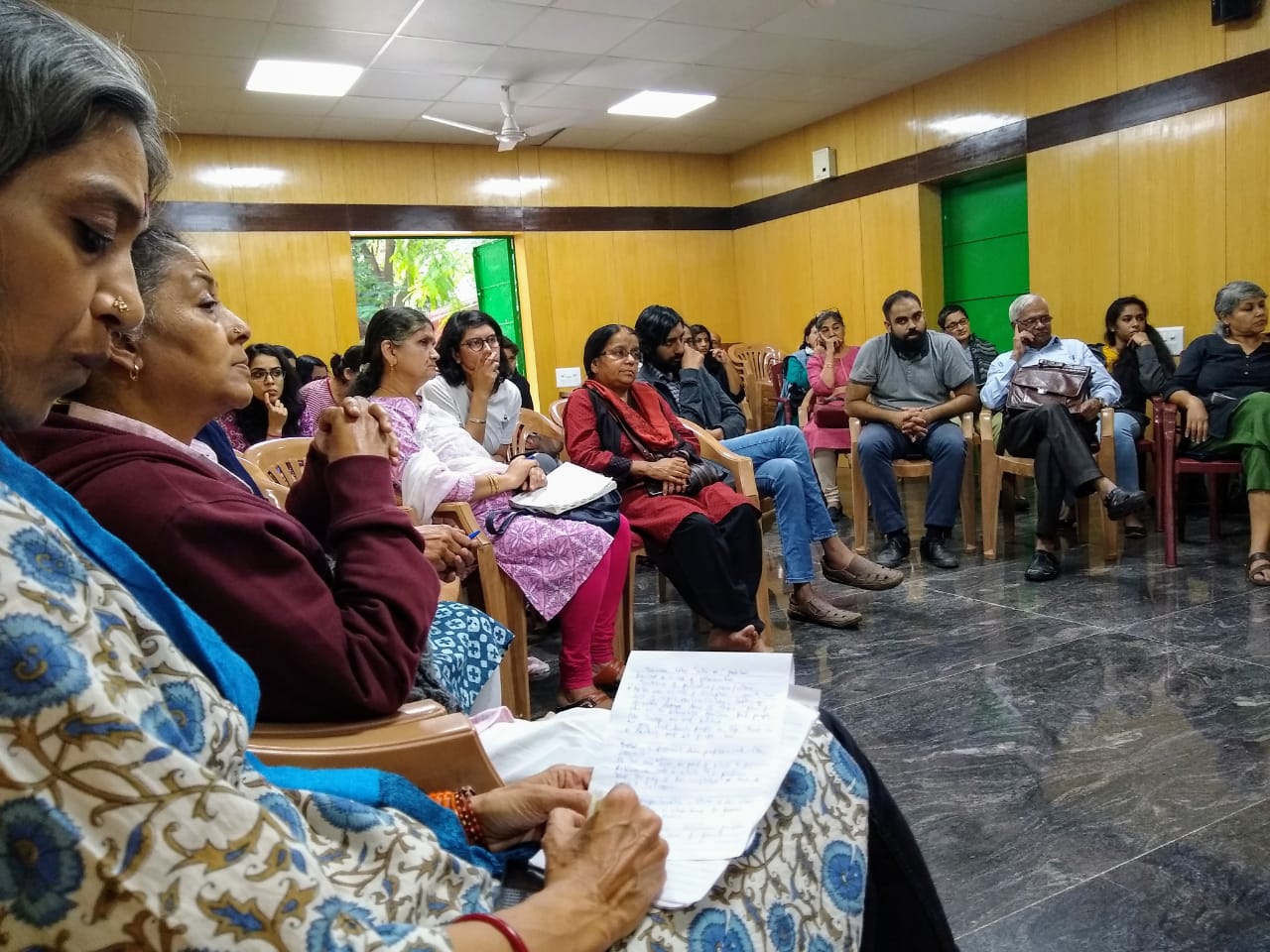 Ashwini Tambe proposed the event as an exchange and a strategy session taking stock of #MeToo as a global movement and thinking about what the next steps should be. She started by noting that the dominant narrative about #MeToo as a hashtag that sparked a spontaneous awakening denies important antecedents. Public speak-outs about sexual violence have a long history in feminist settings. And in the last decade, she noted, there has been an upsurge in activism against sexual violence and harassment in various parts of the globe, such as Argentina, Japan, China, South Africa. In India as well, the ‘Nirbhaya’ case in 2012 facilitated more intense conversations on the topic. #MeToo as a hashtag also comes in the wake of other successful hashtags, such as “YesAllWomen” and “WhyIStayed.” “#MeToo did not generate, as much as feed into, ongoing agitation around sexual harassment and violence,” said Ashwini. Such a genealogy can remind us, in a time of rapidly shifting news cycles, of the depth and history of activism on these topics. “It can shift focus away from individual wrongdoers and provide a language for naming and analyzing wider problems.”

Who is left out of the narrative?

#MeToo’s greatest impact has been in specific professional sectors where reputations matter, such as journalism, entertainment, education and politics. “Yet” Ashwini noted, “these sectors are not known to be the worst sites of gender-based workplace abuse. There are numerous other sectors where sexual harassment is endemic; the most troubling sectors are those where private settings make abuse easier, such as domestic work or childcare, and service industries where the pressure to please customer leads servers to feel pressure to succumb to customer requests. But harassers in these sectors are not celebrities and therefore less vulnerable to digital public shaming,” pointed out Ashwini, articulating a commonly held concern about the visibility of the #MeToo moment not being proportional to the scale of the prevalence of sexual harassment at the workplace.

Calling for “a sharper lens to understand coercion” Ashwini then proceeded to describe the need to go beyond the emphasis on only verbal consent, to also articulate how “seemingly ‘consensual sex’ can sometimes be coercive”. “Coercion should be defined by more than just whether a less powerful person says ‘yes’ or ‘no’. It hinges on whether a less powerful person might interpret a request as force — or even as a threat. If a person faces negative consequences for saying no to a sexual advance, then that sexual advance is coercive.” This would mean naming a wider range of settings that could be considered definitionally coercive: where a power differential (for example professor/student, supervisor/worker) shapes the dyad such that individual consent is not meaningful.

She described critical differences in money, experience, and age that make sexual predation possible in workplaces. She called to turn to focus on historical wage discrimination; policies on flexible and part-time work; how skills get defined and valued in masculinist ways. Our goal, she said, shouldn’t only be to “unseat the coaches, bosses, directors, and executives who have abused their power. We need re-script practices that make it difficult for women to inhabit these roles.” 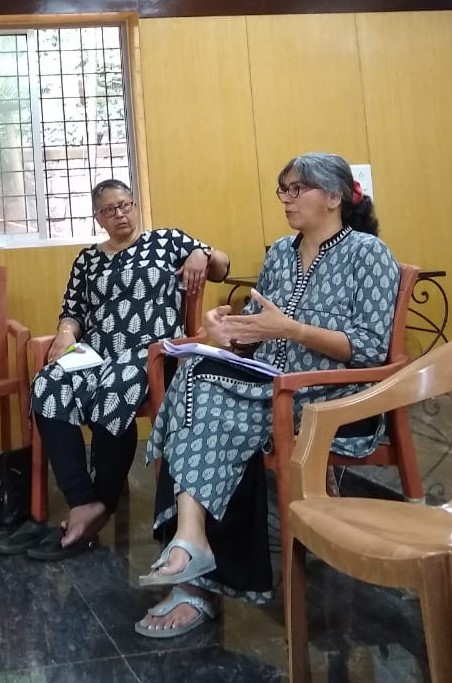 Ashwini pointed out the need to devise ways forward that imagine routes beyond criminal-justice based systems. Restorative justice approaches, for instance, focus on what victims want, first- which may not be always resemble the punitive approach of the criminal justice system. She observed the “creative means US black women have been devising to address the problem of sexual violence” and described the Black Women’s Blueprint effort to convene a Truth and Reconciliation Commission that “gave 15 survivors the space to share their stories and for harm-doers or those who enabled them to take responsibility.”

As regards training, which faculty and students are consistently asked to undergo, Ashwini made two points: the role of training is to indemnify employers, and there are studies that show that courts frequently dismissed suits alleging harassment when employers had a harassment training policy in place. “It might be more useful to get creative about how we frame such training, starting with not calling it “training” —which presumes that people are inadequate. We need to find practices and measures that encourage empathy; ask people to imagine scenarios, dilemmas involving harassment, to help become aware of how someone facing harassment feels. The need is to engage people’s views, rather than a top down training,” she said.

When the #MeToo hashtag took off, it was exhilarating to see a topic that feminists have taken up for decades being so widely discussed. It was heartening to see how much more seriously people took the accounts of those who had hitherto been silent or silenced. “What if we expanded our discussion of consent to include constrained settings; what about the lack of consent to structures within which one makes choices?” She concluded that the central question was: what kind of change do we want to see, and how do we bring it about? She then proceeded to field questions from the audience.

The following points came up during the discussion:

The meeting ended with the collective brainstorming and the need was expressed for more such open forums for discussion.