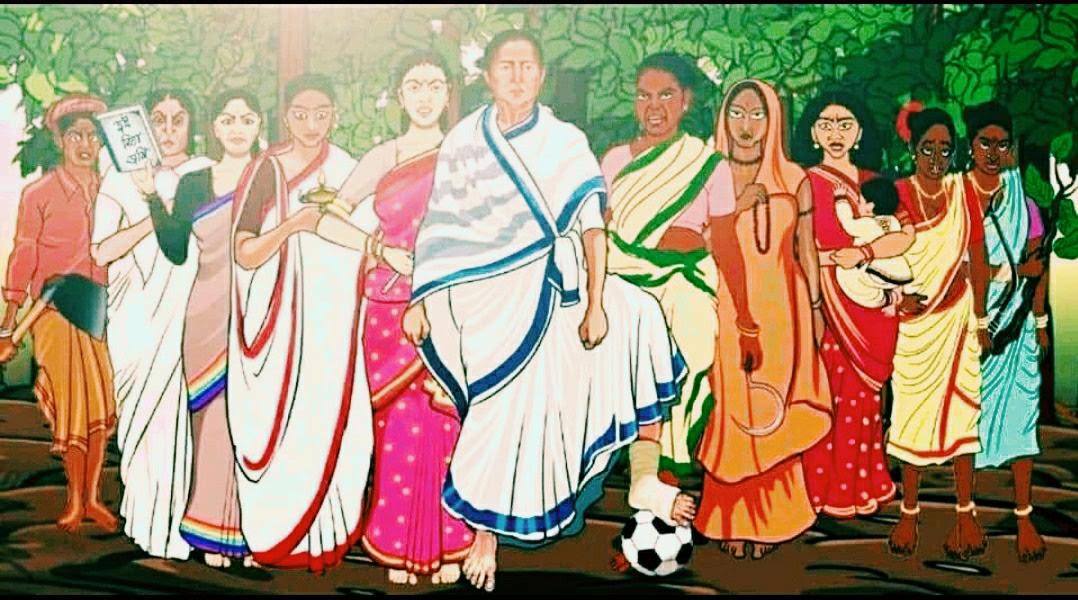 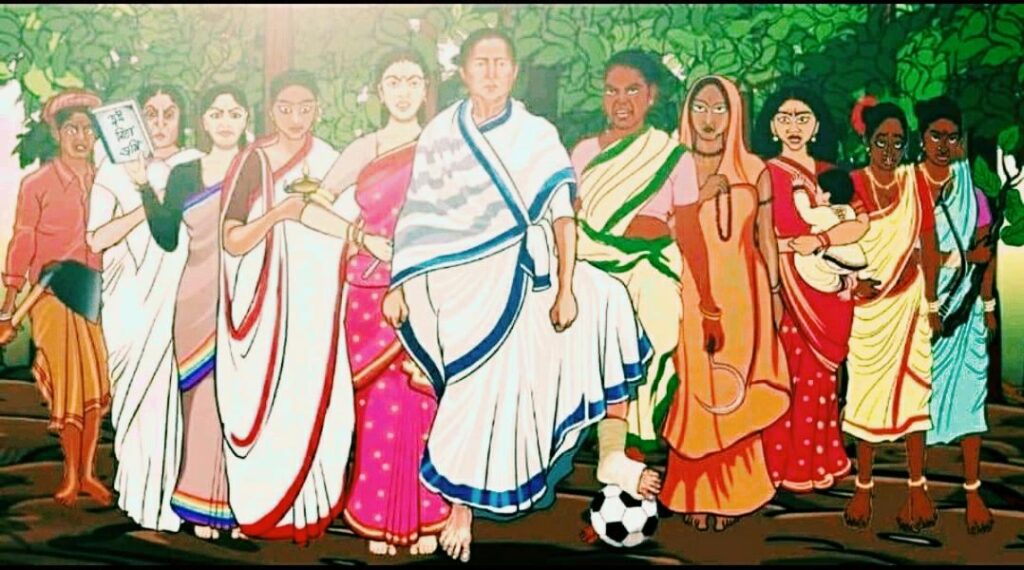 The 2021 West Bengal election was an assertion and affirmation of the empowered woman, as leader and voter.

Backed by the support of women voters, who independently decided who would get their votes, India’s only woman chief minister, Mamata Banerjee, won a two thirds majority in a 294-seat state assembly for the third time in succession.  Victory came at the end a ferociously fought battle against the challenger, the Bharatiya Janata Party (BJP), which has established itself as the muscular and aggressively masculine champion of Bharat Mata and the Hindu majority.

Among the female electorate, Adivasi, upper caste and Muslim women, especially from economically disadvantaged backgrounds, voted in higher numbers for Mamata Banerjee and by extension the Trinamool Congress, according to the Lokniti-Centre for Study of Developing Societies report on how West Bengal voted.

Women constitute about 20 per cent of the ministers in Mamata Banerjee’s 43-member cabinet, possibly in response to the crucial support  she received from  female voters. Further, of the eight women named as ministers, three are from different tribal communities: Birbaha Hansda from Jhargram, Jyotsna Mandi from Ranibandh in Bankura and Sandhyarani Tudu from Manbazar in Purulia; one is a Muslim: Yeasmin Sabina, from Mothabari in Malda, who has political experience and was a minister earlier, too;  one is from a scheduled caste: Seuli Saha from Keshpur in West Midnapore; and the rest – Shashi Panja, Chandrima Bhattacharya and Ratna De Nag, besides  Mamata Banerjee herself –  are upper caste Hindus.

Overall, 50 per cent of the women who exercised their franchise during the 2021 state elections chose Mamata Banerjee and by extension the Trinamool Congress; this indicates a rise in support from 2016, when 47 per cent of women voted for the Trinamool Congress. More men voted for her this time, too: 46 per cent of men, cutting across lines of caste and religion, chose Mamata Banerjee in 2021, against 41 per cent in the previous election. The four per cent increase in women who voted for her in 2021 is a significant number. It does, however, indicate a small decline in female voter support to Mamata Banerjee; TMC’s lead among women compared to men reduced marginally in 2021 (4 per cent), compared to 2016 and 2019 (6 per cent).

The induction of three women from tribal communities as ministers is emphatically affirmative action. Co-opting them into the power structure is a strong endorsement of women as leaders, who will no doubt serve as role models for younger women. It will also work to get across the message that leaders have a responsibility to shape policy, oversee the delivery of benefits and ensure effective administration – that, in other words, ministers are accountable for the work of government.

It is also an acknowledgement that the Adivasi woman is no longer a marginalised person – poor, educationally backward, lacking in sophistication and vulnerable in various ways. Birbaha Hansda is an alumnus of Calcutta University, Jyotsna Mandi is a mechanical engineer with a diploma, Sandhyarani Tudu has completed high school and is a social worker. Together these women represent competence, ambition and achievement.

The Lokniti-CSDS analysis shows that Dalit and OBC women voters and the relatively affluent among women voted for the BJP. Support for the BJP from these segments of female voters is intriguing and calls for a deeper dive into the reasons for their apparent political preferences. The Hindutva appeal appears to have resonated more among these segments of women voters than others. The question that needs to be asked – and answered – is: did the BJP’s carefully crafted appeal to women voters, stressing on their relative insecurity in a state ruled by Mamata Banerjee, persuade these voters to choose the BJP?

The BJP’s campaign in West Bengal necessarily focused on one woman, Mamata Banerjee. The image of the woman as a leader that evolved in the process of the party’s campaign is interesting. It revolved around the person, style and performance in government of the woman leader – Mamata Banerjee – and at every point it iterated negative stereotypes of women found in popular fiction, mythology, cinema and folk theatre.

The BJP’s election campaign brought into focus a form of politics that casts women in set roles, such as liar, schemer, deceptive, immodest, uncivilised, abusive shrew. Sections of the media, both regional and national, uncritically repeated and thereby amplified such verbal attacks. A bias was implicit in these reiterations because at no point did the regional or national media call on women scholars, gender experts or feminist activists to debate the content, language and style of the campaign, and discuss whether or not it constituted a new and potentially aggressive attack on women, especially women who challenged the new political order of muscular, masculine nationalism.

As self-appointed guardians of women’s place in the social sphere and as champions of India’s “civilisation” and traditions, the BJP and its electoral campaign painted a picture of Mamata Banerjee as a shrew, a virago. All the vote catchers of the party – from Prime Minister Narendra Modi to Home Minister Amit Shah, from BJP president J P Nadda, to state party chief Dilip Ghosh – dwelt at length and at almost every public meeting on Mamata Banerjee’s language, effectively branding her a foul mouthed, disrespectful, uncivilised and unrestrained harridan.

She was also labelled a liar and a “dramebaaz” (drama queen).  For example, leaders from the BJP, as well as the Congress and the Communist Party of India Marxist (CPIM) jumped on Mamata Banerjee, implying that she was a liar, the day she was injured in Nandigram after filing her nomination from the constituency (March 10).  The media investigated the matter and concluded that she was not attacked. But they also extensively reported opposition parties’ reactions, which questioned the injury and claimed that it was part of a devious plan by Mamata Banerjee to win sympathy by painting herself as the victim of an attack.

Thereafter the media – regional and national, print and television – reported every verbal attack by the BJP and other opposition parties accusing Mamata Banerjee of faking the injury and indulging in wheel chair drama. The trope of the immodest woman was brought into play. BJP state party president Dilip Ghosh made an ugly, sexually suggestive comment at a public meeting: “Plaster has been cut, there is now a crepe bandage, and [she] keeps raising her leg and showing everyone.” He then went on to add, “If [she] has to keep her leg out, then why wear a sari, [she] could wear a pair of Bermudas instead so that [it] can be seen clearly.”  He tried to make it into a cultural matter: “Mamata Banerjee is the Chief Minister of Bengal. She should respect Bengal’s culture. A woman in a saree showing her legs repeatedly is not Bengal’s culture.” The idea of the uncivilised, immodest woman who flouts social conventions was deployed by the BJP and reported uncritically by the local and national media. Even the CPI(M) used the raised foot on a stool image to suggest that she was kicking people in the face.

The BJP campaign honed in on the woman leader as a deceitful schemer, as a woman who resorted to masquerade to allure voters. Her Nandigram rival and one-time protégé, Suvendu Adhikari, repeatedly called her “Begum,” insisting that she had adopted the dress code of Muslim women and implying that she secretly recited the Quran in her prayers, in order to attract and appease Muslims. He loudly asserted that she incorrectly chanted Sanskrit slokas, insinuating that she was a bad Hindu.

The personal nature of the political attacks was evident in the heckling resorted to by the Prime Minister, who used “Didi O Didi” as a war cry to taunt Mamata Banerjee with.

The 2021 West Bengal election campaign is significant for many reasons. Women’s decisive role in shaping the outcome of the election is one part of it. The other is how a composite image of women made up of seriously unacceptable stereotypes was the central focus of the opposition campaign.  It  was used to embody all that was wrong with the incumbent, Mamata Banerjee and the Trinamool Congress, and all that was right about the challenger, Narendra Modi and the Bharatiya Janata Party.

By allowing themselves to be co-opted into uncritically disseminating the unacceptable stereotypes, which were obviously offensive to female voters – as the election results indicate – without questioning or challenging them, almost all of the mainstream, national and regional media retreated, perhaps unintentionally, from the role most of them had previously played as champions of women’s rights and advocates of women’s empowerment. An in-depth review of the coverage of the campaign, looking into if and how the media misread voter preferences, especially those of women voters, followed by serious introspection, may be necessary and useful to assess how embedded social prejudice can impact the practice of journalism.