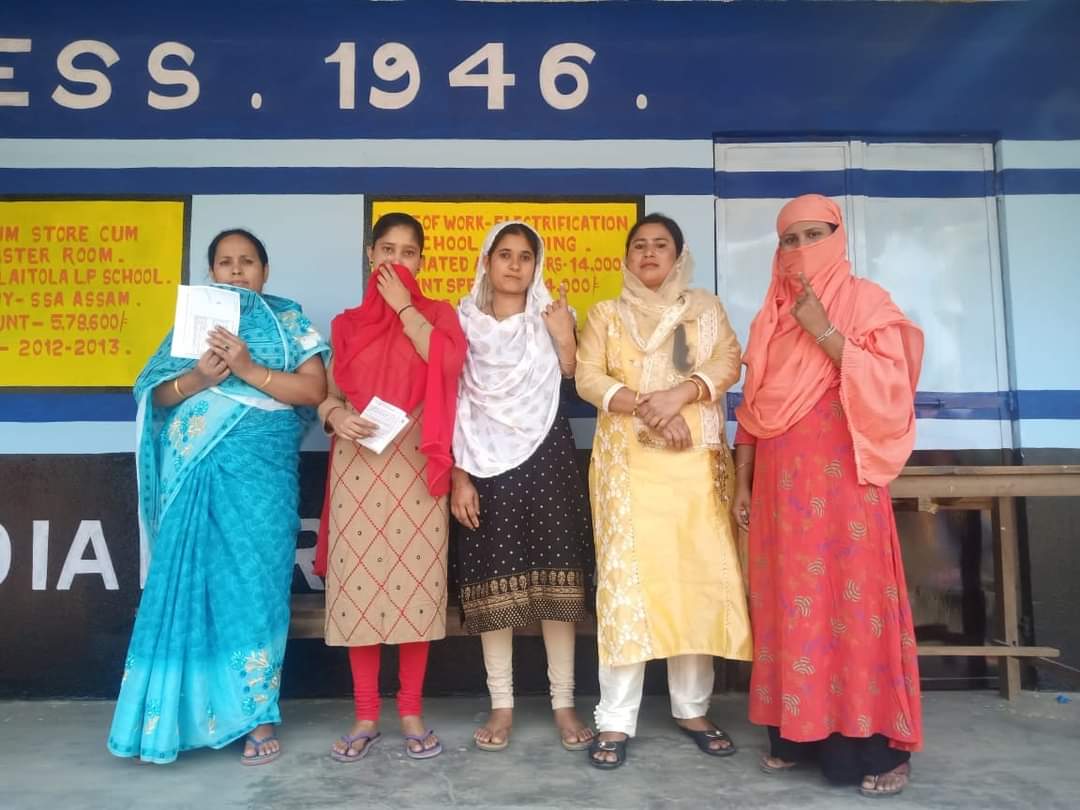 A photo essay by NWMI editors with inputs from Durba Ghosh

Women comprised 49.35 per cent of the electorate in the three-phased Assam assembly polls 2021. Only 74 women candidates contested, a mere 7.82 per cent of the total of 946 candidates. Polling concluded on April 20, after the Election Commission of India announced repolling at four polling stations in Ratabari, Sonai and Haflong assembly constituencies.

Women tea garden workers, who are mostly women, comprise a major chunk of the electorate, and all political parties had reached out to woo them. Women’s rights activists in the state described the promises they made as mere tokenism.

In a bid to entice voters, the EC had set up theme-based polling booths across the state. The polling station in Dolaitola, Hajo election district, for instance, was painted to resemble a train on a platform, and named the Dolaitola Express.

In Cachar, polling stations were eco-friendly, using only recycled material. , The first voters to arrive were gifted saplings. The entrance was made by women belonging to self-help groups, who wove traditional ‘Shital Pati’ mats. These polling stations also had exhibitions displaying the handicrafts and handloom specific to the district.

The polling station in Palasbari was dedicated to COVID frontline workers with paintings of Covid Warriors. A health camp was also set up as part of the initiative.

In an effort to encourage first time voters, selfie stalls were set up at many polling stations across the state. In 2021, 12,81,918 first-time electors voted in the Assam state assembly polls.

Among them was 22-year old Anubhuti Gohain Boruah, an LSE Mathemeatics Masters student who happened to be home because of the pandemic.
The right to exercise my franchise and assert my democratic rights had remained a strong urge within me since the last assembly polls in Assam 2016. I had missed my chance then by a few months as elections were held in April and I turned 18 in June. “This time, I feel privileged to have been able to cast my vote for my state.  Cynics have time and again pointed out to me that my single vote does not matter but to me each ballot is important and hopefully, it will help my state to become a better, peaceful and developed place. Improved education facilities, better employment opportunities, security of women,  environment conservation , tourism promotion and growth of economy are some of the key areas that must be given top priority by the new government, ” she says.
Supriya April 21, 2021
Share
Tweet
Share
Share
Latest Posts
1
Media Ethics, Portrayal of Women in the Media, Statements