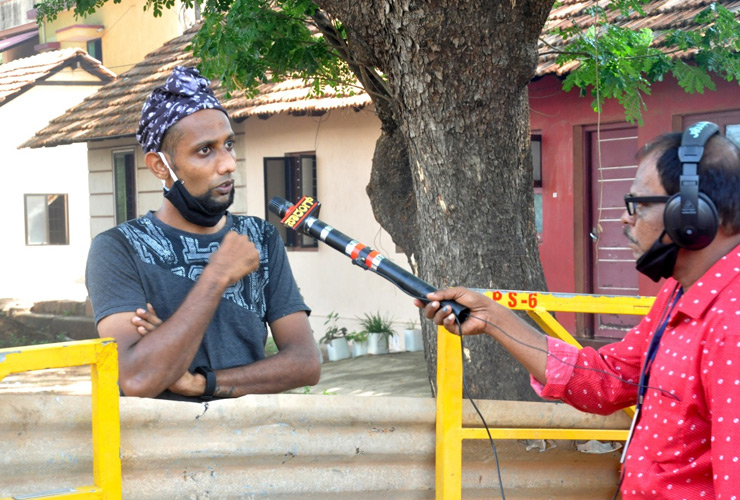 By Pinky Chandran and Ashish Sen

When they played I’d sing along, it made me smile
Those were such happy times and not so long ago
How I wondered where they’d gone…
But they’re back again just like a long lost friend…”
Yesterday Once More, Carpenters

Back to the future? Too soon to determine perhaps, but the writing on the wall seems to be getting more stark. As comparisons between Spanish flu and COVID-19 make headlines, radio is making a comeback in ways that it hasn’t for a long time. A Nielsen survey administered online in the US between March 20 and 22, 2020 found that 83% of consumers were listening to as much radio as they were before the pandemic, or even more. Back home, a study commissioned by the Association of Radio Operators for India found that radio listenership had increased by 23%. But there is a difference. Thanks to technology and the mushrooming of social media, radio’s lease of life has taken on a spate of different avatars including podcast.

While there has been not much data on community radio (CR) listenership, media reports across the globe are packed with stories on the role of community radio during the pandemic. The Indian scenario is no different. Apart from mainstream media coverage, community radio practitioners and activists have refused to buckle under the lockdown. Instead, they have used technology to their advantage, combining terrestrial broadcasting with the internet to get their messaging not only to but also across communities. Several WhatsApp groups of community radio stations are buzzing throughout the day and night with a range of programmes and activities. We are perhaps witnessing a renewed surge and growth of the sector – programmatically, organisationally and in terms of reach.

So why is it happening?
I heard it on my radio…
…Radio, what’s new?
Radio, someone still loves you
Radio Gaga, Queen

According to Vinod Pavarala, UNESCO Chair on Community Media, “Community radio is an excellent medium for crisis communication, as it has been proven repeatedly during times of natural disasters across the world such as earthquakes in Japan, Haiti and Nepal, the tsunami in Indonesia, Sri Lanka, coastal Tamil Nadu, cyclones in Odisha, and floods in Uttarakhand and Kerala. During the current pandemic crisis, we are already seeing some amazingly committed and creative work by CR stations across the world. They are especially effective because of their hyperlocal character providing locally relevant information.”

Dr Sreedher, community media practitioner, says, “Locally relevant information is vital, something that might not be possible with mainstream media — international, national or regional. Authentic information in real time, from food availability, ration timings and facilities for migrant workers to information regarding local doctors and hospitals, is the need of the hour, which can only be fulfilled by community radio given that producers are from the community.”

Dr Kanchan Mallick, Department of Communication, University of Hyderabad and co-editor of Community Radio News, has been “following the inspiring stories on our groups and social media platforms, shared by community radio stations about their efforts during the COVID-19 pandemic. The multiplicity of their innovative contributions during these trying times proves beyond doubt that CR is not just about making radio; it is about serving communities. As states across the nation are under lockdown, forced to close their borders and impose quarantines, CR stations are on-air supporting their listeners in the most creative ways – disseminating vital, verified, and village-level information in local dialects through songs, skits, folk tales, and discussions and even through live phone-ins”.

From providing accurate and timely information about COVID19, to documenting daily concerns, from countering rumours and identifying false news, to playing specially curated song lists and hosting quiz shows on the coronavirus, from running radio schooling initiatives to setting up helplines for psychological counselling and domestic violence, these stations have been working long hours, and how.

Many CR stations are networking with local organisations and authorities, and also reaching out to vulnerable communities with essential supplies and public health messaging. For, instance the Assam State Disaster Management Authority has collaborated with Radio Brahmaputra to prepare audio jingles on COVID-19 awareness. Pavarala adds, “They are especially effective because of their hyperlocal character. This kind of information combined with the demystification of highly complex medical and scientific material is being done effectively in local languages and dialects. For example, a station in Himachal Pradesh is broadcasting coronavirus-related information in Garhwali and Pahari, while a station in Odisha is deploying traditional Pala singers, just as a station in a tribal area of West Bengal is mobilising Santhali musicians to convey vital messages. Community radio stations are, by definition, better placed to understand local realities more intimately and have the ability to mobilise and elicit participation of communities in taking proper health and safety precautions. Many stations are not stopping with on-air work, but are also engaged in important offline outreach activities. A station in eastern India that caters predominantly to an indigenous community actually went out to the tribal hamlets to demonstrate the use of masks and physical distancing norms”.

Several reports in the media indicate an escalation in domestic violence and child sexual abuse during the lockdown. Community radio stations have often provided “safe spaces” both for counselling and trauma healing, as Archana Kapoor, founder of Radio Mewat, points out. “In an extremely patriarchal society, Radio Mewat is reaching out to survivors/ victims of domestic violence and engaging them for making masks, which also earns them earning money. Radio Mewat has become a symbol of compassion, as the team of seven reporters is together reaching out to around 150 odd listeners daily to check on their well-being and welfare. Till date they have connected with 3,000 people”.

Kapoor affirms that “the role of community radio has gone beyond being just a medium for informing and educating communities, to also of caring for and standing by the community. This is a crisis or a disaster whose end doesn’t seem to be in sight. And this is the time when the community radio has gone beyond its mandate of giving a voice to the voiceless to helping save lives and giving livelihoods.”

“Any disaster requires an immediate and consistent flow of accurate and reliable information. This helps citizens deal with emotional and physical stress and overall enables effective resonse to the crisis,” says Venu Arora, co-founder of Indeosync Media Combine. [See box: “Fulfilling the need for public interest journalism in a time of crisis”.]

Here is a glimpse of how Community Radio Pulse in Australia, as described by Mitchell Dye, a radio producer at the station, is making a difference. “Our community radio station has typically had around 300 presenters coming through the studios each week to present their programmes. The risk of coronavirus has meant that we have had to change our operations to keep our volunteers safe. Each day between 9 and 11 am we have a live presenter keeping the community informed about the latest information, and outside that time our presenters submit programmes that they have created from home studios.

“The role of community radio in this time is to present the community with timely and accurate information that you can’t get anywhere else on radio. In our city of Geelong, we are the only radio station doing in-depth interviews and discussions with key decisionmakers, MPs and councillors to keep our community informed during this time.”

Mitchell asserts, “The mayor of Geelong is still coming on my programme, Mitchell’s Front Page, every two weeks to inform the community about how the city is responding and where people can find help. A couple of weeks ago our federal MP and the deputy leader of the opposition came on my programme to answer questions directly from listeners about coronavirus. This is sort of radio that you just can’t get anywhere else in our city.”

Mitchell’s Front Page is a two-hour current affairs programme that airs every Monday and Tuesday from 9 to 11am. It covers Geelong issues and offers long-form interviews with key decisionmakers and representatives of all levels of government. “We are continuing to do this work during the time of COVID-19 when it is extremely important for our community to get information.”

From far-flung Geelong city to remote districts in India, the phone never stops ringing at community radio stations. The calls cover a range of concerns and requests, from wanting to have their voices heard, to the problems people face – like the need for food and essentials, the loss of livelihood, the non-payment of salaries, the need to pay EMIs and other debts, and stress and panic attacks.

Where do we go from here?
My best friend, my faithful, a dear old heart
Tuning on, on you,
On radio, on radio…
Life on the Radio, Bay City Rollers

So far, so good. These efforts often come in the face of formidable odds. The playing field for community radio stations is far from level. Apart from restrictions on movement, there is the challenge of funding, the cost of internet connectivity, and sometimes even exclusion from interactions with government. This is not confined to India alone, and appears to be a trend in various parts of the world. Participating in a recent discussion with Bangladesh NGOs’ Network for Radio and Communication, Professor Pavarala noted: “Of the approximately 1,000 community broadcasters in the country, only about 200 are currently able to function, what with physical distancing norms, lockdowns and transport problems. The severe personnel crisis facing stations is further compounded by restrictions on the movement of CR reporters, poor mobile signals, slow and expensive connectivity – and, interestingly, the reluctance of government officials to give interviews to CR staff over the phone.” In Bengaluru, with lockdown constraints firmly in place, only three passes have been provided to Radio Active 90.4 Bengaluru to facilitate its work. This has not, however, stopped the programmes from diminishing. A typical day at Radio Active sees as many as 10 special programmes, in addition to live updates and other regular programming. The station runs 24 hours. [See: ‘In it Together: Radio Active Special Series on COVID19’]

A recent report in the UK’s Guardian reiterated the Community Media Association’s (CMA) observation that “ a third of [the country’s] community radio stations could face closure due to the impact of coronavirus without urgent government support.” While the CMA emphasised the crucial role of community radios in the country, they felt “left out of government support plans.” The chairman of community radio station Sheffield Live, Steve Buckley, said he hoped “we will not have to wait until the public enquiry to find out why the government thinks our audiences are less important than those of the local press.”

As Venu Arora, puts it, “community radio reporters are our soldiers who stand for people’s right to communication and a right to their own media. It is they who ultimately become the voice of marginalised communities and it is in times of crisis that we witness this over and over again and yet fail to provide the support that is due to them”.

Pinky Chandran is the co-founder of Radio Active 90.4 MHz in Bengaluru and NWMI member. Ashish Sen is an independent media consultant, community radio educator and advocate.