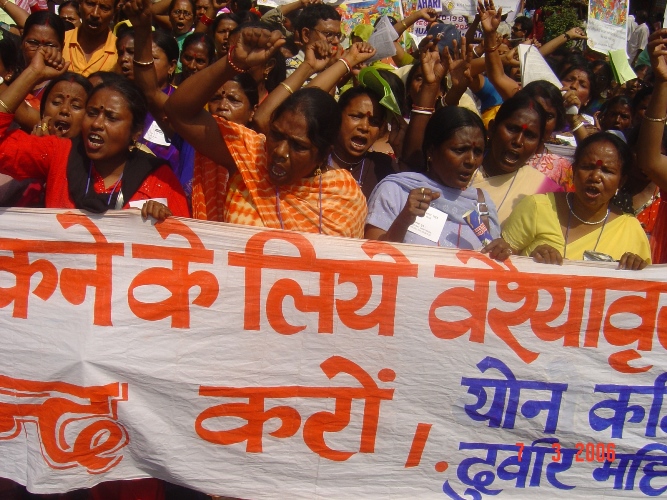 Editors’ Note: The NWMI condoles the untimely passing of Dr Smarajit Jana (68), founder and chief advisor of Durbar Mahila Samanwaya Committee (DMSC), on 8 May 2021. A pioneer of the sex workers’ rights movement in India, he was recognised for being among the first to advocate for the recognition of sex work as work. An epidemiologist and specialist in community medicine, he was also widely respected for his tireless and effective work in the field of HIV-AIDS.

Thrilled to receive her voter card, Rina (name changed) kissed it time and again, and proudly showed it to her friends. The sex worker could not believe that she would be able to stand in a queue and cast her vote in the ongoing West Bengal elections. It was the outcome of a process initiated by the Durbar Mahila Samanwaya Committee (DMSC), representing 50,000 sex workers and their families. Over two weeks before the start of the eight-phase election in late March, it petitioned the Chief Electoral Officer of West Bengal, stressing the importance of sex workers being able to vote in significant numbers in this election.

Despite universal adult franchise being enshrined in the Constitution, this has not been a reality for thousands of sex workers in West Bengal, who belong to a historically marginalised and stigmatised community. The reasons for their not voting range from their own ignorance and lack of documentation to the failure of institutions to draw them into the process.

This year, DMSC was determined to help more sex workers secure voter cards and, to this end, nominated one project staff member for each red-light district in the state’s capital, Kolkata. Sonagachi, the largest red-light district in the city, was divided into five sections and five support staff were put on the job of downloading forms and attaching relevant documents to voter card applications. As a result, more than a thousand new voters were registered here, and many of them have been keen to cast their votes.

However, there have been challenges. Exercising the right to vote cannot be seen in isolation. It is part of a larger scenario in which the sex workers’ collective is challenging the power equation in the areas where they live and work. That this is upsetting existing power structures is evident from the attempts by hoodlums to create disturbances in the month of March, not just in Sonagachi but in other red-light districts, too.

The rise in aggressive behaviour towards sex workers has been concerning for the leadership of DMSC. The increase in the number of newly registered voters among the sex workers is seen as a threat by some – a signal that sex workers will not toe their line and will, rather, exercise their free will while casting their votes. Mindful that tensions could rise further on election day, DMSC asked the election authorities to declare all sex work sites sensitive areas, and to ensure full protection of the workers’ voting rights. In fact, it provided the authorities with a list of 47 geographical locations, with ward numbers, from different municipal units where sex workers are concentrated, and are willing to vote.

DMSC then took the pivotal step of registering a cooperative society (Usha Multipurpose Cooperative Society Limited, or Usha). Usha is of, for and by sex workers. The registration of the cooperative marks an important stage in sex workers’ struggle to reframe the definitions and meanings of sex work as an occupation. Usha hopes to use the fact that a state institution has formally recognised sex work as a legitimate profession to bolster the campaign for social recognition of sex work and to establish sex workers’ rights to self-determination.

Usha supports sex workers in moments of crisis, and helps to mitigate their economic desperation by creating a space for negotiation in support of their rights. It helps them enroll their children in educational institutions, support the marriages of their sisters, and so on. Helping them exercise their franchise is integrally linked to all of this – it turns them into active and engaged citizens and makes it harder to deny them their entitlements.

Thus, in 2004, Usha approached the Election Commission of India and engaged with the head of the state election commission in West Bengal to explain the reasons why sex workers were not voting. They pointed out that the Immoral Traffic (Prevention) Act (IPTA) prevents landlords from providing rent receipts, electricity or telephone bills to sex workers as tenants, thus making it hard for them to furnish the residence proof that is a prerequisite for securing a voter identity card. They argued that the passbook of Usha should be recognised as a valid document providing proof of residence, and secured a big victory when the officials agreed. This provided the bedrock on which DMSC could launch its efforts to help sex workers obtain voter cards.

Significantly, these efforts have come at a time when the sex worker community, like many others, is facing the challenge of the Covid-19 pandemic. Sex workers have lost out on regular earnings due to lockdowns and other social restrictions. DMSC organised relief for sex workers with support from socio-religious organisations and other agencies, such as the Azim Premji Foundation. It managed to ensure food and other goods for sex workers and their families in different pockets of Kolkata from April 2020 onwards. The relief was also extended to the LGBTQ community. DMSC also organised awareness programmes among sex workers on Covid 19, showing them how they could protect themselves.

In response to a writ petition submitted by DMSC in July 2020, the Supreme Court directed states to provide dry rations to sex workers without insisting on identity proof. This verdict helped the organisation negotiate with the state authorities for food coupons or ration cards for sex workers. In the process, more than 10,000 sex workers across the state got ration cards and, thereby, free rations every month. This had other implications: it made it easier for sex workers to apply for voter cards since they could now attach their ration cards to their applications.

DMSC is still waiting to hear from the state election commission on its demand to declare all red-light districts sensitive areas. However, the organisation is heartened by the fact that the commission sent a team to the DMSC office with an EVM machine to demonstrate how it works, and initiated discussion with members on how it can provide support, although the nature and extent of support have not been spelt out so far.

Alongside, DMSC and ANADAM, an LGBTQ forum, have worked together on their charters of demands and invited candidates across political parties to attend a meeting at DMSC’s Kolkata office. Among the important demands are the removal of clauses from ITPA that indirectly criminalise sex work and workers, inclusion of sex work in the labour schedule, full recognition for a self-regulatory board as the principal arbitrator to deal with all kinds of violence and trafficking in sex work, which has also been recommended by a committee constituted by the Supreme Court of India. It is hoped that this election will prove a turning point in the struggle of sex workers to become part of Indian democracy.

Kajal Bose is the secretary of DMSC. The Late Smarajit Jana was the chief advisor of DMSC.

Polling amidst a raging pandemic: Anecdotes from West Bengal