The most iconic female politician that Kerala has ever known, KR Gouri, is no more. She left us on May 11, 2021, wrapped in the red communist flag that she loved, stamped with the hammer, sickle and star.

Born into an Ezhava Dalit family that was immersed in the Reformation movement of Kerala, she was encouraged to study. Gouri went on to become the first Ezhava law graduate.

Her ambition to be a lawyer and to be financially independent ended when the communist party decided to nominate her as a candidate in the Travancore elections of 1948. She decided to accept the wishes of the leaders, but lost her first election even though it gained her a lot of popularity.

She later noted in her autobiography, Atmakatha: “It was a turning point in my life, to become a candidate, to run campaigns and to go asking for votes. But to stay away from the party after losing the elections looked like cheating the people and breaking a promise. Wouldn’t people think that I am abandoning politics because I lost an election?” Steeled by the determination to fulfil the promises she made to her people, she decided not to ever go back to lawyering. “Thus I started working vigilantly, without letting myself be subjected to anyone’s will or leadership, I got involved in activities that I was convinced about.”

And thus was born the politician, KR Gouri, who went on to become the only woman minister in the very first ministry of Kerala state. She is the most prominent and powerful woman politician the state has ever known. She was the only woman in its first cabinet, in 1957, serving as revenue minister. For a quarter century after that, too, Kerala had no other woman minister.

In the course of her long career she led six ministries and held more than ten portfolios, including excise, law, agriculture, social welfare and temple administration. She piloted landmark bills into law, including the epoch-making land reforms bill, a women’s commission bill and an anti-corruption bill. She earned a reputation as a brilliant administrator. The fact that Gouri was Ezhava, from a backward caste community, made her achievements all the more singular; while Ezhavas formed the backbone of the party, it was shaped and dominated by upper caste men.

In 1969, she had just ended her relationship with her husband, communist icon TV Thomas, due to personal and political differences. She suffered a painful miscarriage and a heart attack soon followed in quick succession. But the immense task of getting the Land Reforms Act passed was at hand. She bounced back to play an active role in the Karshaka Sangham movement, led by farmers fighting for their right to the land they tilled, and to table the historic Land Reforms Act in the Assembly. She was on the floor arguing for the Bill late into the night – 1 am, which is an unusual feat even today. She turned her pain and personal sufferings into courage and fought for the most-downtrodden people, helping her people and party to bring to life the most powerful piece of legislation that changed the landscape of Kerala forever.

I piece together her historic journey filled with many inspirational moments in this article, which was never intended to be an obituary.

The Knife, by Fiftytwo.in, opens with a beautiful illustration by Akshaya Zachariah. 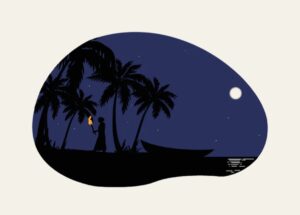 It is inspired from this part of the story: “In interviews, Gouri has recounted how, while returning from party and public gatherings late in the night, she would take the boat to the kadavu (the coast of the backwaters) and then walk home alone, guided by the light of a choottu (burning torch) in her hand. ”

Gouri was born into a landlord family (not uncommon among the Ezhava caste she was born into) and grew up in a house with abundance. But it was also a house that was immersed in the Reformation movement of Kerala. She loved her gold jewellery and beautiful sarees. She loved her career and her financial independence. But when she signed up to become a member of the communist party in 1948, she knew that it would mean a life of working for the most impoverished and destitute people of her society. Years of struggle lay ahead of her, as she walked with a burning torch into the middle of a revolution.

She was many things. An intelligent politician. An excellent administrator. A much-admired lawmaker. She was also a lone woman, fighting for her place in a patriarchal world. She was a woman who walked with a burning torch into the camp of upper caste men, with all fury and light. Rest in power, Gouriamma.