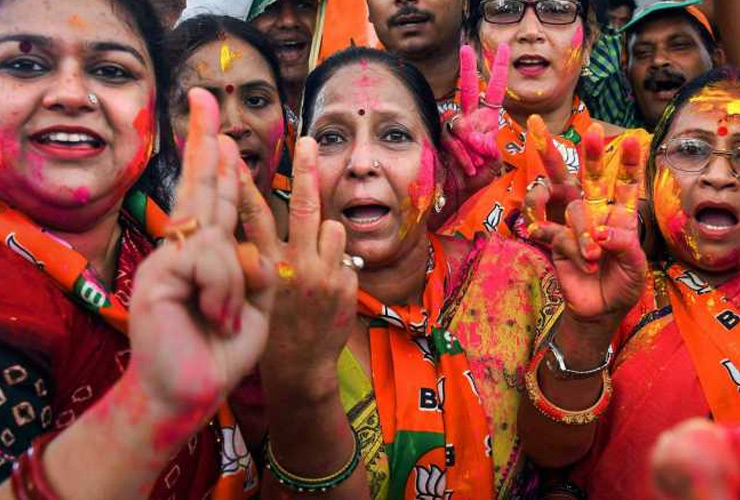 Seventy eight is better than ever and yet simply not good enough.

When just 8.8% are candidates, it is a minor miracle that 14.3% make it to the House. The evident paucity of women on the ballot points to endemic patriarchy in political parties but there is more to the problem than meets the eye.

As a female party leader told me, “They always take the trouble to herd a dozen of us to the rally, and seat us on stage with the promise of a moment at the mike. We are carefully arranged in the last row of chairs, always a bad omen of things to come, or rather not to come. After hours on our backsides as showpieces, and hours of staring at the backsides of various male leaders, the rally closes with not a single word uttered by any of us women ‘leaders’!”

Running for office is but a culmination of the planning, arranging, setting up, organising, resourcing, managing, staffing, paying, and agenda setting of the election. But the politics of gender exclusion means that male decison makers at every level thwart party women, keeping them from occupying roles with authority. So what to do when the hands that hoard are the only ones that can apportion?

One approach is to start with responsibility, not authority. While party women are visible in protests as bodycount, in rallies as audience and in door to door campaigns as door openers, they have scant leverage. That leverage comes with booth level responsibility. And, when carefully built, it can make aspirational women indispensable to the party’s electoral success.

All parties struggle for booth level leaders. If the BJP is the strongest and most well organised at booth management, it is because they work on developing booth level cadre, leaders and committees painstakingly for months. Most parties, including even the BJP,  find it difficult to get enough booth level staff even though they are so crucial for bringing home the votes.  So they pay people to temporarily don the hat during elections. The hired simply do not deliver results on par, and here is why.

Booth level work involves the most basic level of social contact. A booth caters to about 1000 votes in the local area. For a party to secure those votes, these grass roots workers need to maintain contact with the voters in that area continually, disseminating party messages, linking local issues to party stances and in general drumming up excitement about the party in voters’ minds. In addtion, the onus of ensuring that rolls are up to date with new entries and exits also lies with these ground level workers. The more you are invested in the party, the more convincing you are to voters, since your passion comes through. And you build trust.

While there is a preponderance of women and men vying for election tickets and positions of authority in parties, that is not the case with booth level workers and leaders who are and have to be actively pursued and recruited by parties. Yet, they are the ones that build social capital for the party that converts into votes, and hence hold leverage to the tune of  a few hundred to thousands or lakhs of votes. This is hardcore electioneering, of the text book variety, the kind not only practised by the BJP/RSS but refined by them into an art form.

This dearth of grassroots human resources faced by almost all parties presents an open opportunity for women with a political bent. Women volunteering for booth level work can start building their outreach by using the electoral rolls in the states heading to the polls next. They can naturally reach out to fellow women, women’s groups, self-help groups, Anganwadi workers, health care workers, farmers (and by that I mean women) and, most importantly, students.

This will have extraordinary ramifications for women in electoral politics. When booth-level capture of responsibilities by women is well on the way to becoming a recognisable reality, there will be no more ignoring of the female force in electoral politics. The woman political worker will have the pulse of the people, and she will be the pull for the local people, getting out the vote. This will transform the dynamics of ground level politics, with the capacity to change both society’s and parties’ perceptions of the political strength of women.

Media can also then witness and report on the bond between grassroots women party workers and voters instead of focusing on female candidates’ looks and relationships to party men of significance.

If women’s voices are to boom over the microphone in political rallies, then their toil must carry over the voter rolls in booths. When women are front and centre in that very basic building block of elections, the booth, the cameo of male backsides will be a thing of the past.

More details on the representation of women in the 17th Lok Sabha available here:

India elects a record 78 women to the 17th Lok Sabha: Here’s who they are

India Elects a Record-Breaking Number of Women to Parliament

A rising tide of female voters