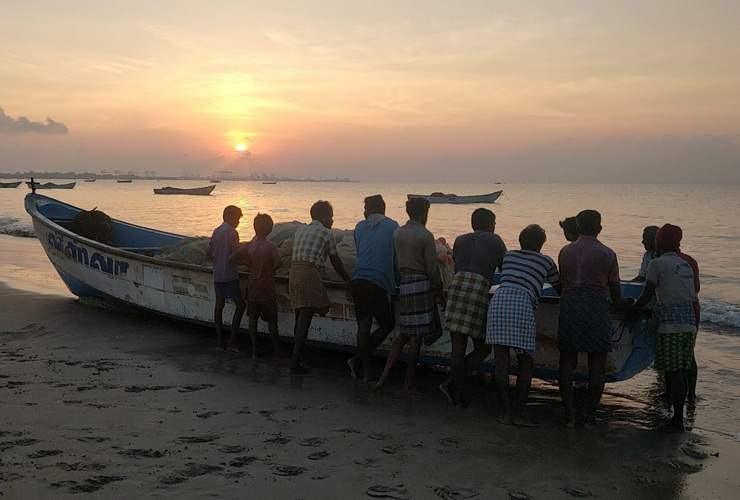 Asking just this question while reporting on any issue has been the game-, or rather the story-changer, for me many a time. Just like it was when I asked this in Tamil, while out reporting on the recent Lok Sabha elections.

It was India’s east coast. The sun did a fabulous rise for us: slow, glorious, a golden disc above the Tuticorin sea. This was Day 5 of the 18-day 3-state, 3000-km journey that we had set for ourselves as part of what we called the Pickle Jar Poll Express – in an effort to understand the South of India by putting our chappals on the ground, and telling the stories we found, via video, audio and text. 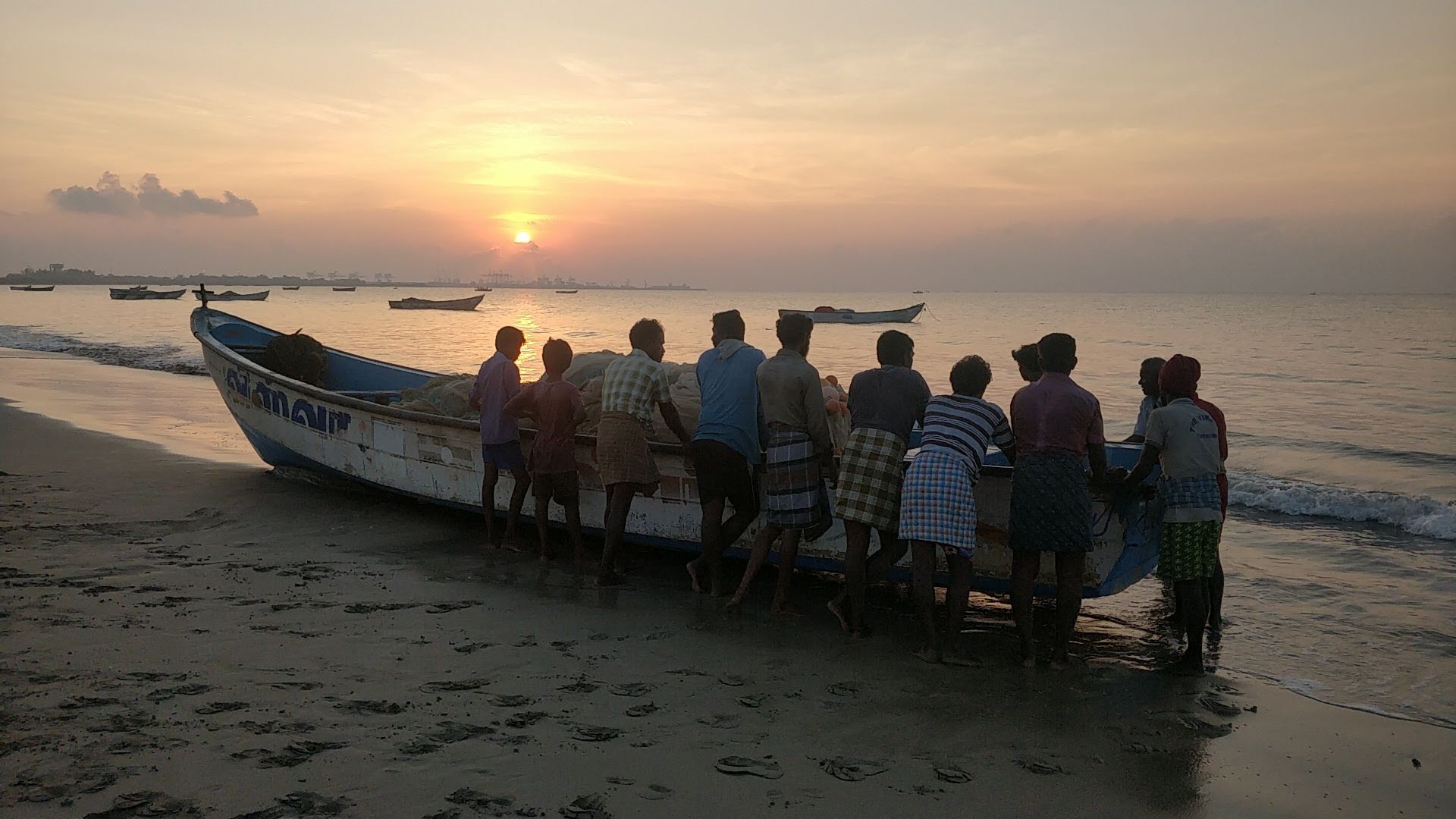 Having started our trip from Thiruvananthapuram, my camera colleague Chinmaye Bhave and I had driven down 90 km from Kerala’s capital into Tamil Nadu and the country’s tip, Kanyakumari, asking diverse sets of people what their lives were like and what they would want their new leaders to do for them.  We had arrived the evening before in the sea-city of Tuticorin (also called Thoothukudi), a town that was in the news last year for the death of nine people in police firing when they were protesting against the Sterlite company, to take a closer look at the campaigns of two feisty women doing a face-off – both from renowned political families:  Kanimozhi of Dravida Munnetra Kazhagam (DMK) and Tamizhisai Soundararajan of the Bharatiya Janata Party (BJP).

The night had ended late, but we were up early the next day, headed to the beach at 5 am to get ‘morning visuals’ for our footage before starting the drive to Madurai. Time was short. As I watched typical scenes of fishermen getting ready to go to sea, nets and ropes, pushing their boats in with all their might, I saw two men standing on the shore in deep conversation.  We walked up for a chat. One of them turned out to be ‘meenava samudaya thalaivan,’ the chief of the fishermen’s community, Krishnamurthy.

In a video conversation Murthy sir told us about how life is tough, how prices of everything from food to land to diesel for the motor boats have skyrocketed but, at the same time, the fish price per kilo has stayed more or less the same as it was 10 years ago. He spoke of how the government needs to look at their plight as their children no longer want to remain  fishermen/women.

The shoot done, Chinmaye and I were given fresh coffee in a steel tumbler and murukku that a guy on a cycle came selling.  Slurping the drink and getting ready to leave for our next destination, I asked Murthy sir, “Pombalenga yenge?” 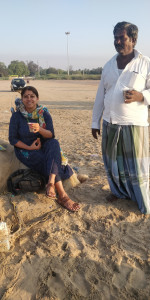 “Oh, the women?” He signalled to two young men to come forward and said, “Take both of them to our colony.” They had bikes and the two of us perched ourselves on the pillions. We rode, wind on our faces, past the Tuticorin power plant, the turbines and the smoking towers.  About five kms later, we vroomed into a settlement. Instantly the scenario changed – coloured plastic pots lined up at the public tap, women and children in the queue, hens and chicks running around outside small box-like houses.

The women nudged each other when I told them what we were there for and called for Sundari to speak to us on camera. A lady, perhaps in her 50s, emerged from inside a house. Over the next few minutes, Sundari told us about water being scarce (right on the shores of the mighty Bay of Bengal), livelihood a struggle, respiratory diseases on the rise from the fumes nearby. I realised with shock – and only when she mentioned it – that the place where we stood was, in fact, the ‘Tsunami colony’: a place to which fisherfolk were sent after the devastating sea waves struck in December 2004.

“We did not want the colony to be called this,” Sundari said, recalling that they had said so to the government officials who had come to supervise the shift. Not only did they not choose the name, they also protested against it. “The tsunami took away so many of our people.  We want to forget that tragedy and rebuild our lives, and here you are giving us that name to our new homes?” she said. But, of course, their wishes were not heeded, and Tsunami Nagar now has close to 100 families inside its walled compound. With blue boxes for homes, a locked community hall, it is a completely unimaginative habitation, just like many other rehabilitation settlements one has seen. 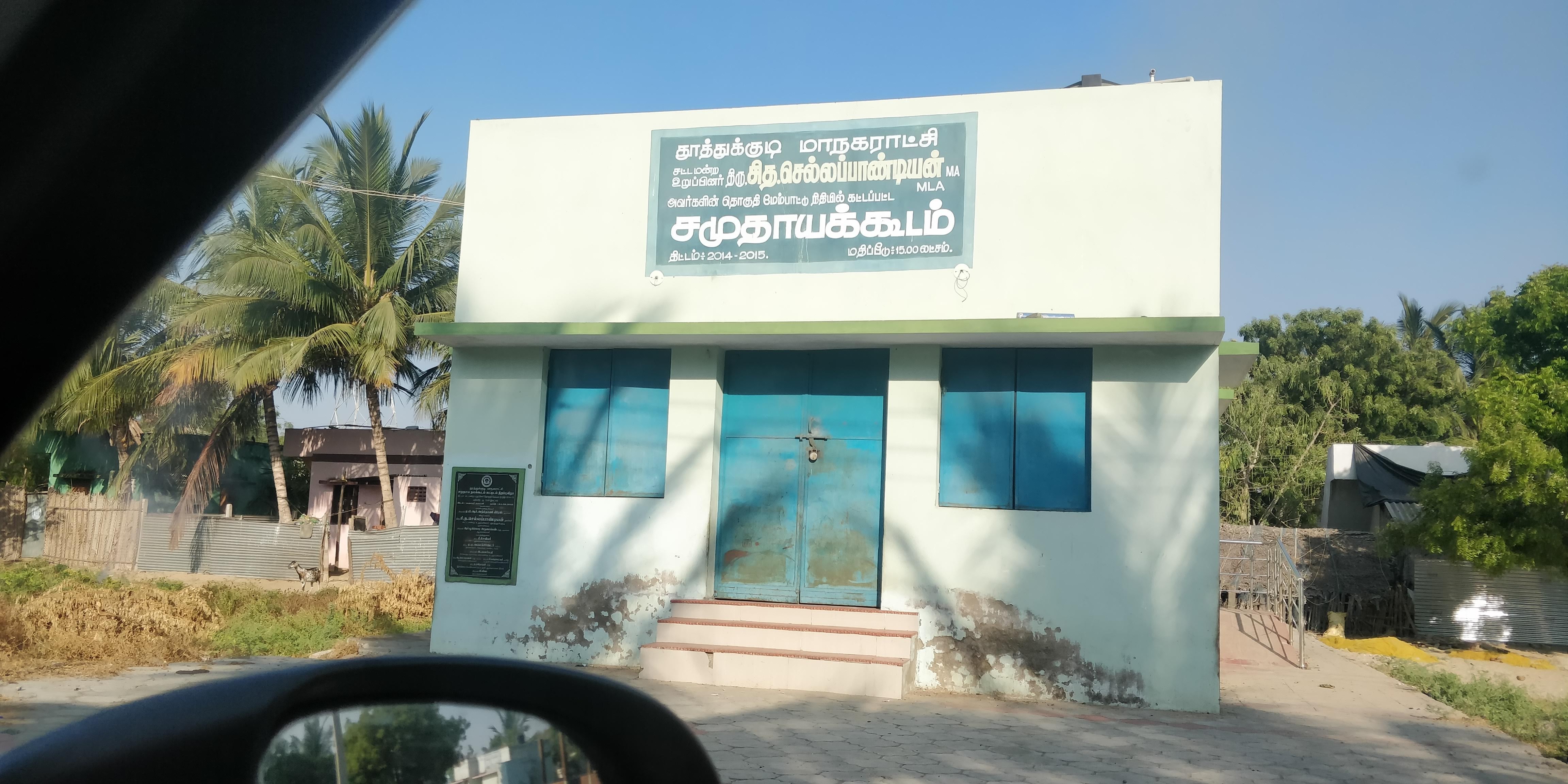 One thing that Sundari said has stayed in my head: “Gudusaiyile sandoshama irundhom ma” (We were happier in our huts).  And that wasn’t mere rhetoric. According to her, when they lived by the sea in their old homes, the main causes of death were old age or, occasionally, the sea or storm claiming men when they went fishing.  A pregnant woman, Sudha, standing next to Sundari said there were now all kinds of illnesses:  children and adults with chronic cough, for instance, or constantly experiencing some ailment or the other.

“Earlier, when our children got married, we would build a new hut for the couple,” said Sundari. In the ‘Tsunami colony’ new family members get added to the already-cramped houses.  Sometimes, over the years, 15 or more people have had to be accommodated in a house meant for four or five. ‘Privacy’ is a word no one has heard. And, of course, they cannot afford real estate outside in the town of Tuticorin. “It is so frustrating. We have been keen to build a temple here for our aatha (sea goddess).  But that will take a lot of money.”

A data check online for the Tamil Nadu government’s post-tsunami rehabilitation efforts revealed that such projects received funds worth Rs 5,280 crore from external funding agencies like the World Bank, as well as the Central and state governments. These funds were supposed to be spent on “better mitigation plans, rebuilding of infrastructure, vulnerability mapping, relocating and rehabilitating displaced families and restoring the coastal ecology.”

A July 2015 article in Down To Earth quotes a coordination officer who said  there were only one or two agencies providing rehabilitation still left in the state’s coastal belt, while in the immediate aftermath of the disaster there were over 400 NGOs working on relief and rehabilitation.

Thoothukudi District has a coastline of 163.5 km and fisheries is considered a crucial industry. Tamil Nadu has the second longest coastline in the country among all states, comprising 13 coastal districts. According to a 2017 research study by the Fisheries College and Research Centre, the population of marine fisherfolk in Tamil Nadu is 9.64 lakh, spread out in 608 fishing villages. The nearby Thoothukudi fishing harbour (TFH) is one of the oldest fishery ports on the east coast of India.

The abject misery of the fisherpeople did not seem to have come up in any local or regional newspapers or television channels during the period of our travel in Tamil Nadu. Neither DMK’s Kanimozhi nor BJP’s Tamizh Isai had gone into the settlement to speak to any of the families or accept their petition during their campaign. “Kanimozhi’s convoy stopped for one minute outside our colony and she waved to us,” said Sundari.

We wound up our shoot, packed our equipment and drove out of the colony, which is when I noticed the faded board written in English and Tamil – and the story I would have almost missed, with huge lessons on how public policies and rehabilitation schemes work on ground:  Tsunami colony of Tuticorin.

Conversation with Sudha on life in the ‘tsunami colony’ (in Tamil) available here.

A record six women from Gujarat in 17th Lok Sabha