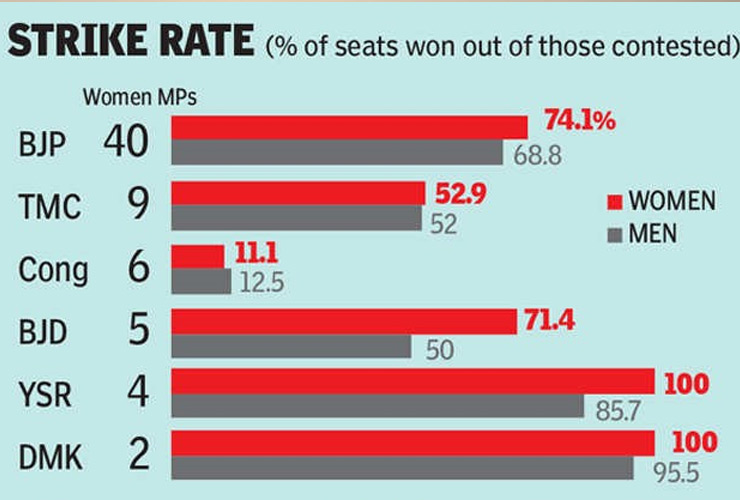 The Women’s Reservation Bill – aka The Constitution (108th Amendment) Bill –  was first tabled in Parliament in 1996 and reintroduced by various successive governments over subsequent years. The 2008 version of the Bill which, like its earlier avatars, proposes reservation for women of 33 per cent of all seats in the Lok Sabha (ie, 180 of 543) as well as in all state legislative Assemblies, was passed in the Rajya Sabha in 2010. Close to a decade later, the Lok Sabha has yet to vote on it.

Predictably, women’s presence in the national and state legislatures has hardly increased in the interim.  The 15th Lok Sabha (2009-14) had been historic in that, for the first time since Independence, women’s representation rose above nine per cent, with 59 Members of Parliament, making up nearly 11 per cent (10.87 per cent) of the total. The 16thLok Sabha (2014-19) saw a marginal increase in the number of female MPs: 62 or just over 11 per cent (11.41 per cent).

The just elected 17th Lok Sabha was unlikely to be radically different. Among the main national parties, the BJP had fielded 45 women out of a total candidate count of 374 (just 12 per cent), the Congress 47 out of 343 (just marginally better at 13.7%). On the other hand, the Trinamool Congress (TMC) in West Bengal and the Biju Janata Dal (BJD) in Odisha had fielded more women this time:  17 out of 42 (over 40 percent) and seven out of 21 (just over 33 per cent) respectively.

If the number of female MPs has jumped from the previous 62 to 78 women this year, it is mainly thanks to a few regional parties. Election 2019 has resulted in the highest ever number of women MPs in Parliament but their share is nowhere near the 33 per cent envisaged in the Women’s Reservation Bill. It is still just 14 per cent.

It is interesting to look at the number of women who won the Lok Sabha polls alongside those who won elections to Assemblies in the states that went to the polls almost simultaneously in April/May this year: Andhra Pradesh, Arunachal Pradesh, Odisha and Sikkim.

As reported here in November 2018, late last year the Odisha State Assembly had passed a unanimous resolution seeking 33 per cent reservation for women in both state Legislative Assemblies and Parliament. In the run up to the Lok Sabha polls 2019, Naveen Patnaik of the BJD, Chief Minister of Odisha, announced that 33 per cent of the candidates would be women; women were fielded in seven of the 21 parliamentary constituencies in the state.

Fortunately, the customary gap between what is said and done appears to have been plugged by this regional party as far as the LS polls are concerned. Of the BJD’s contingent of 12 MPs in the 17thLok Sabha, five are women (nearly 42 per cent of the total). The TMC, with nine women among 22 MPs from West Bengal, is close behind, at nearly 41 per cent.

According to this infographic from The Times of India, the strike rate was as follows: 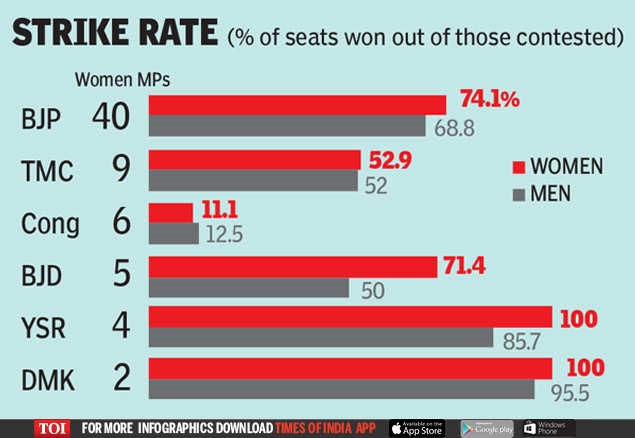 As mentioned earlier, in November 2018 the Odisha Assembly passed a resolution, supported by all parties (albeit with some grumbles from Opposition parties), to reserve 33 per cent for women in the state Assembly. In 2014, there were only 12 women among the total of 147 members. Unfortunately, the situation has taken a turn for the worse this time.

During the recent elections to both Parliament and the Assembly, Odisha saw fewer people voting, mainly due to the destruction caused by Cylone Fani, which hit the state in early May (the worst disaster in the state in 20 years). The BJD won 110 seats in the 147-member House. However, the expectation with regard to female representation was far from met: only two women made it as MLAs.  Patnaik’s new ten-member cabinet includes one of them: Tukuni Sahu. 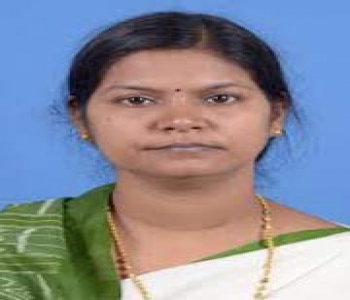 The good news from this frontier state in the northeast was that the number of women standing for election to the state Assembly in Arunachal Pradesh increased this year: 11 women contested the polls for the 60-member Assembly. In 2014, the figure was four less. A woman candidate, a greenhorn, also stood for election in one of the two Lok Sabha constituencies. The thrust was to empower more women in the state and address issues of concern to the tribal society. However, the bad news is that only three women have won Assembly seats and no woman will represent the state in the Lok Sabha for the present.

To understand the record of this Himalayan state, known for strong regional parties, in terms of women’s participation in politics, it is worth reading this backgrounder on the politics of Sikkim. For now, the state has no female MP and only one woman has been elected to the local Assembly led by P.S Golay of the Sikkim Krantikari Morcha (SKM), who has beaten the longest-serving Chief Minister, Pawan Kumar Chamling of the Sikkim Democratic Front (SDF).