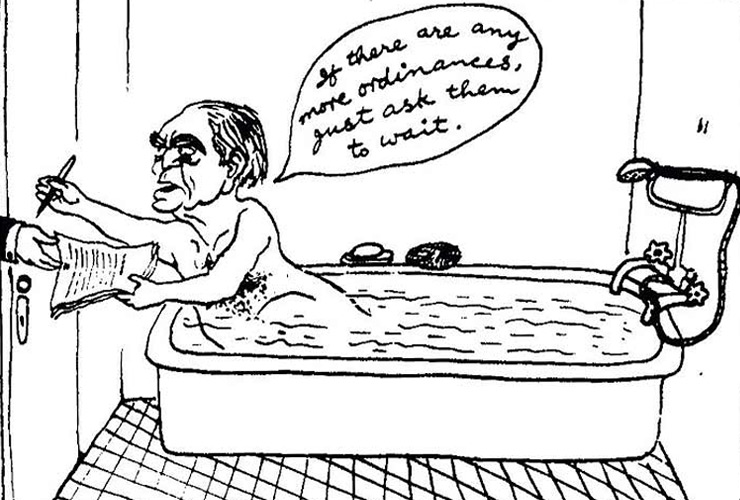 Six women from Gujarat elected as Members of Parliament during the recent national elections were sworn in during the inaugural session of the 17th Lok Sabha on 17 June 2019.  This is the highest number of women elected from the state since it was formed in 1960. In the 16th Lok Sabha, there were five female MPs from Gujarat.  So the tally improved by one this time.

Gujarat is in fourth place among states in terms of the highest percentage of women elected to the Lok Sabha: six women among 26 MPs, representing 23% of the total. All the state’s seats were won by candidates, male and female, of the Bharatiya Janata Party (BJP).

Odisha emerged as the leading state in this respect, with women comprising one third of the state’s MPs:  seven out of a total of 21.  Chief Minister Naveen Patnaik’s decision to field women as 33% of the candidates given tickets by the Biju Janata Dal (BJD) evidently paid off:  all seven women who won the Lok Sabha elections from Odisha belong to the BJD.

The other states where women have secured more than 20% of their Lok Sabha seats are Chhattisgarh with 27% (second place) and West Bengal with 24% (third  place).  Next comes Uttarakhand with 20% (fifth place), where one woman won one of the state’s total of five seats. Here, too, the BJP made a clean sweep.

Women in the fray in Gujarat

In Gujarat, the BJP fielded six women candidates whereas the Indian National Congress (INC or Congress) fielded just one woman for the total of 26 seats it contested.  The BJP increased the number of women contestants from five in the 16th Lok Sabha to six in the 17th Lok Sabha. This is the highest number of women the party has fielded in Gujarat since its inception in 1984.

Four out of the six women fielded by the BJP were sitting MPs.  Among the other two women who won, one was the widow of a state minister belonging to the BJP and the other, Geeta Rathwa, was fielded from Chhota Udepur, a reserved constituency for Scheduled Tribes (ST).

The sole woman fielded by the Congress, Geeta Patel, contested from the Ahmedabad East Lok Sabha constituency. Said to have the backing of firebrand Patidar leader Hardik Patel, she also lost the election, along with all the other Congress candidates.

Sitting BJP MP from Surat, Darshana Jardosh, almost missed getting the party ticket this time even though she had won her seat with the highest margin in 2014. In the 2019 elections, Jardosh won by a margin of 5.48 lakh votes. The others who won are Poonam Maadam from Jamnagar, Bharati Shiyal from Bhavnagar and Ranjan Bhatt from Vadodara.

Twenty other women contested the general elections in Gujarat from smaller parties or as independents, bringing the total number of women who contested during the recent Lok Sabha elections to 27 – a record for the state.

Although all the major political parties have long paid lip service to the need to reserve 33% of seats in Parliament and Legislative Assemblies for women, they cite winnability as the main reason for not fielding more women for election. However, that excuse does not hold much water. All female contestants fielded by the BJP since 2009 have won Lok Sabha elections in the state.

The other large party in the state, the Congress, has a bad record in fielding female candidates. It started with two women contestants in 1962, during the first general elections to be held in Gujarat after it became a state, and it has never fielded more than two in any subsequent Lok Sabha elections.

In 2014 the Congress fielded just one woman, Prabha Taviad, who was the sitting MP from the reserved ST constituency of Dahod. but she lost in the “Modi wave” that delivered all 26 Lok Sabha seats to the BJP in May 2014.

No woman minister from Gujarat in union cabinet

Gujarat has had a female chief minister in Anandiben Patel but not a single woman among the Lok Sabha MPs from Gujarat has ever been appointed as a minister or even minister of state in the central government.

However, Smriti Irani, who became a Rajya Sabha MP from Gujarat after elections to the 16th Lok Sabha has served as a cabinet minister since 2014. Earlier, Urmilaben Patel, wife of senior politician Chimanbhai Patel and also a Rajya Sabha MP, was appointed as a cabinet minister in the Congress government headed by PV Narasimha Rao in the early 1990s.

In fact, as far as power equations go, female Lok Sabha MPs from Gujarat have little say in the party and wield no power in the state, let alone at the centre.

Women leaders from the BJP, a party where very little dissent is seen out in the open these days, have expressed their dissatisfaction with the party for not fielding enough women candidates. On March 31, when the Lok Sabha elections were getting underway, Shania NC, a BJP party spokesperson and one of its  prominent faces in Maharashtra, tweeted, “All political parties need to wake up…” According to her, all parties were only paying lip service to the cause. 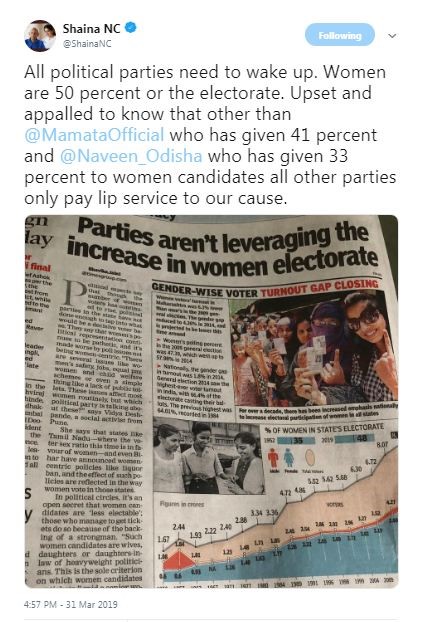 Earlier, Lok Sabha Speaker Sumitra Mahajan decided to announce that she would not contest the 2019 elections after the BJP delayed declaring her name from a constituency from where she had won seven consecutive times.

However, most other female politicians have refrained from publicly voicing their discontent.

Gujarat Mahila Congress president Gayatri Vaghela reportedly said, “Gujarat Pradesh Congress had demanded more seats for women but party has to keep winnability and seat equations in mind.” This, when only one woman has been fielded by the Congress in this as well as the last Lok Sabha elections from Gujarat.

Even parties where the president holds all the cards are not fielding more women, the sole exceptions being the Trinamool Congress (TMC) in West Bengal and the BJD in Odisha.  Both Mamata Banerjee and Naveen Patnaik need to be applauded for not only walking the talk but also being able to take the men in their parties along, convincing them to accept and support this move by the party.

No one wants to give up power and all political parties have faced internal opposition from powerful men in their parties.  However, a good leader should be able to convince everyone to come on board if the cause is good and if the party wants to blaze a new trail.

It is to be hoped that the higher strike rate of women candidates in terms of winning their seats will make the case for fielding more women contestants in elections stronger even as pressure mounts for the long-pending Women’s Reservation Bill to be tabled and passed in the ongoing 17th Lok Sabha.