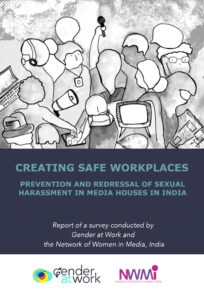 About NWMI: The NWMI is a pan-India network which aims to provide an informal forum for women in media professions to share information and resources, exchange ideas, promote media awareness and ethics, and work for gender equality and justice within the media and society. The NWMI has been systematically engaged in cases of sexual harassment at the workplace, issuing statements, providing support for survivors and also making policy interventions.

About Gender at Work: Gender at Work is an international feminist collaborative of gender experts, and was founded in 2001 to focus specifically on bridging theory and practice, integrating insights from organisational studies, gender and development and feminist political analyses. G@W’s aim to transform organisations, to fundamentally change the rules (and deep structure) and contribute to a new way of thinking.